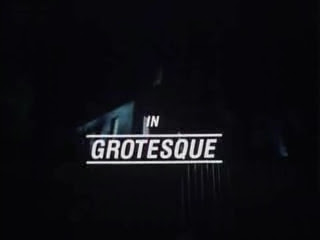 What could be greater than watching psuedo-scream queen Linda Blair and genre-friendly Donna Wilkes in yet another slasher film? Make it a slasher film about home invasion, that's how! But when the movie lacks the certain prowess that would have made it a rather enjoyable piece of scare-flick, what could possibly go right? 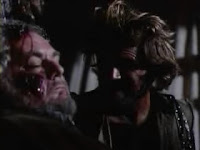 In Grotesque, we have Blair as Lisa, daughter of a well-known makeup artist and special-effects imagineer Orville Krueger. She invites her best friend Kathy (Donna Wilkes) to her family's annual reunion, a gathering taking place up on a snowy mountain inn, a property owned by the Kreugers. This unfortunately meant that help is far from reach when a gang of punk heads begins stalking them in search of thrills and cash. As the punks tortures and murders most of the family, they weren't expecting a bloody twist to their escapade: the Kruegers are hiding a relative in that cabin, one who happens to be a deformed monster who now thirsts for vengeance!

Now, plot is really okay on my book and the production looks quite nice overall. Where Grotesque fell flat was its direction as its uneven pacing had the rest of the running time divided into three acts: the home invasion, the monster-slasher killings, and a campy comic book-inspired ending that felt a bit too silly for my taste. 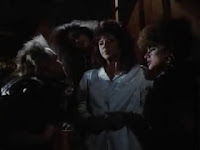 First of, I am impressed with the villains. Though overacted, these punks did manage to be threatening to say the least, as plain ruthless bad guys who have nothing special but their numbers. Their attacks on the poor family have its strong distressing moments, particularly to how much cheeky taunting they've done that are simply cruel, but in the end of the matter, they are meant to be meat. Easy-to-hate meat as the plot's first twist calls for them slaughtered in a sort-of "reverse slasher" second act.

Now, the vigilante monster curveball thrown at us should have been a good one seeing these annoying bastards are getting their just desserts, but with a quick pace breezing through these parts with hardly any build-up to thrill us and the kills being too clean and barely sparking any satisfaction, frankly I prefer this revenge act to be done with at least some powertools. Still, the old monster have done a few good number so it still calls for some fair noting. (He snapped a punk girl's spine against a tree! I have to give him credit for that!)

The last act is where it shifts to a EC-comic style revenge plot, going through yet more twists and turns packed in the last running seconds, all just looking too silly for my gullet to digest. While we all know the monster is a relative, the last act revealed that there's more to it than that and what would have been a satisfying way to get even with these effing punks, another reveal comes in and have the film all wrapped up in a comical fashion. This last twist will either bring a sigh of relief and a few chuckles along the way, or have us feel cheated after all the patience-testing investigations and interrogations we have to sit through. 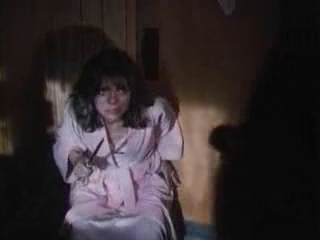 With all of these shifting and turning that resembles the driving skills of a schizophrenic, Grotesque comes out unfocused yet unintentionally funny. One minute we're cringing in fear as a poor family succumbs to torture, the next have a deformed freak killing the villains. It's crazy yet watchable if one's into crazy movies. (Crazy might be an understatement. How on Earth could a bigshot FX artists like Orville fail to own some fancy security system to save them from all these troubles in the first place?)

Slasher fans may easily recognize some faces here as Grotesque packs a few fames from the sub-genre; we have Robert Z’Dar (Maniac Cop (1988)) and Charles Dierkop (Silent Night, Deadly Night (1984)) popping out cameos, and even art director Robert Zoller as the uncredited Sheriff who also handled this film's props. Horror enthusiasts can also find the Silver Shamrock masks from Halloween 3: Season of the Witch (1982) somewhere in the chaos.

With a slight amateurish look and some slasher rules broken (no nudity?! LE GASP!), Grotesque might as well be a very long episode of a TV horror series like Tales from The Crypt, Tales from the Dark Side or, dare I say, Monsters. Some people might find this film a mishap (as I would) but as a time-waster, it has its moments.