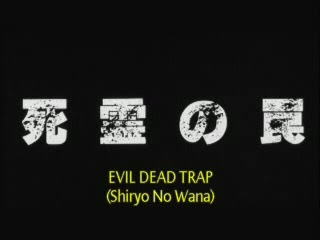 There is one thing I've always been eyeing on Japan and that is the fact that the country rarely approached the slasher genre when it comes to their horror media. True, they did have the giallo-anime movie "Perfect Blue (1997)" and yes they recently have the entertainingly cheesy "DeathTube (2010)" but for straight slashers? The only thing they gave us with much success and infamy was this late 80s entry.

Evil Dead Trap is about a midnight video show host Nami Tsuchiya who during one evening, receives a mysterious tape of a woman chained, her dress tattered, screaming for help from an abandoned warehouse. Nami sighs in annoyance at first as she digresses this tape as another kinky prank as a knife bound hand starts to cut off what remains of the woman's clothes. Things suddenly take a dark turn, however, when the same knife slowly pokes an eye open and mutilates it.

Sure that what she have in their hands is a genuine snuff film, Nami tags along a small group to investigate the murder, much to her manager's disagreement. Following the killer's recorded road trip to the scene of the crime, she and her little crew of would-be detectives eventually find the warehouse and encounter a mysterious detective who's looking for someone. Who this "someone" is, he never bothered answering. Suspiciously enough, he went on to his separate ways, leaving Nami and her ragtag team on their own.

No sooner after that, a man in a rain slicker and papermache mask begins offing Nami's team one by one with over-the-top booby traps until all that's left is her. Can Nami last long enough to fight our boogeyman on her own? Or will she meet a fate far worse than death?

A slasher in its core, only layered with artsy execution, director Toshiharu Ikeda may have seen an Argento film or two as colored lighting and crazy photography stylized this movie quite effectively. Every now and then we're treated with dream-like imagery surrounding the murders and even ordinary scenes involving the characters, heightening the already strong mood created by the film's eerie location, claustrophobic of sorts as many of the scenes were done in hallways and rooms.

Basically, the story is as standard as it can get for a bodycounter with people sticking their noses on places they shouldn't be in and getting a limb or two chopped up from a masked maniac. There's a strong focus on intensely building to a scare and/or a kill, so Evil Dead Trap isn't shy around getting its gore rolling ever presently while still showing some level of restraint; nothing too visceral in terms of the flowing red, but the kills are torturous and prolonged through heavy brutality and nerve-wrecking tension, boasting a cinematography rich in style and flair that may put some slasher titles on a bit of competition.

Of course, the film isn't without its flaws; while the murders are gruesome and darkly arranged, it all happen so soon that within an hour, nearly all of our casts are dead, leaving thirty minutes with Nami wandering around on her own or with the mysterious detective. This tedious display can be worth it, however, as a really weird finale awaits in the near end. Obviously, it's a no-brainer that the mysterious man is our killer but its the unsuspecting twist that give this movie a rather grim overall feeling for me and I find that a good reason to love it. This twist divides audience, creates opinions, and birth both fans and haters, but I personally see it as the film's strongest point.

As an artsy stab on a seemingly dying sub-genre, Japan had it made with this outlandish entry and cult fave. Not going to be the kind of hack-a-thon that will appeal to everybody but at least Evil Dead Trap tries and worked on a level.

Bodycount:
1 female had an eye gouged with knife, slashed to death with knife
1 female repeatedly impaled with giant spikes
1 male gets an arrow shot though his head and exits to his mouth
1 female garroted with thin wire noose
1 male head found
1 female gets a projected machete split the side of her head open
1 male stabbed himself in the heart with knife
Total: 7
Posted by Kaijinu at 8:13 PM