Slasher Masks of the Week Vol.1 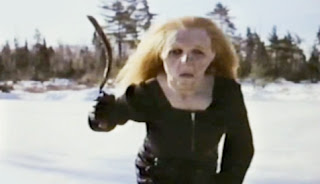 This film had its killer dons a hag mask that's as white as snow and as grim s death. It's a lot creepier if they do close-ups, with those sad pale eyes underneath all them wrinkles. really  good. 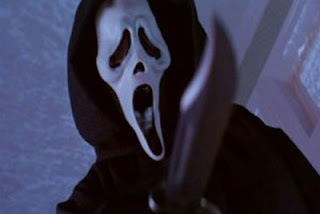 I'll be honest, despite the mask's "pop icon" status, it's never really that scary for me. Let's all be honest here, the mask isn't really scary. The reason why Ghostface is scary, is because he's silent and anonymous.

The mask, however, is originally creative. It's cheap and easy, anyone could be underneath that mask with makes the killer more terrifying... 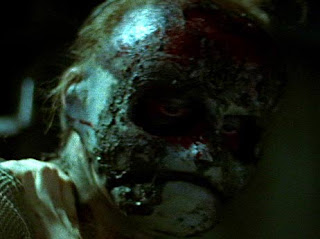 Leslie is an aspiring slasher. He follows every rule there is in slasherdom and that includes the masks.
Sadly, Leslie boy is terrible at choosing masks; he ended up choosing this "egg face" of a mask.

really, Leslie? A green egg for a mask? 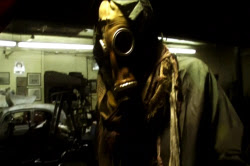 Okay, here's a wannabe slasher who wants to follow Mr. Harry warden's foot steps with this.

Look, buddy, just take off the mask. You got your victims bound to chairs and you're about to burn them, they ain't going anywhere, so might as well take off that cheap mask and get it over with... 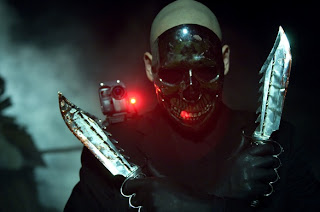 Chromeskull's mask is a...chrome skull. His name is pretty explanatory. it's only weakness if that his mask works on supergluing it to his face, that seems to wear off from time to time.

His mask is not scary, not at all, but it is badass!

Email ThisBlogThis!Share to TwitterShare to FacebookShare to Pinterest
Labels: Random Stuff, slasher masks of the week