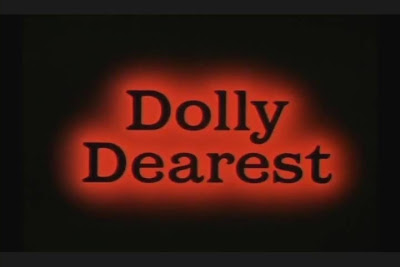 A cast of no names (save Pet Sematary's Denise Crosby), a dash of cheese, and a sprinkle of rip-off. Mix it all together and you'll get another "killer toy on the loose" movie with a few surprises on its own.

The Reads is an American family who just bought a run down doll factory in Mexico, hoping to put it back on track and make lotsa dolls for make a living. Unknown to them, an Archaeological dig not far from the factory have awakened a nine-hundred year old demonic spirit and starts possessing the dolls, including one that's under the hands of Jessica Read, a girl who's slowly being influenced by the evil spirit.

Starting to notice the odd things going on not only at her new home but also her family, Marilyn does the usual "research about the origin" subplot and educates herself of the Sanzia, an ancient civilization of demon worshippers who tried to bring the child of Satan to the world but fails and ended up with a dead baby with horns. But luckily for them the spirit still inhabits the body and so long as the ancient stone seal locking the spirit in a cave remains unopened, then we're all safe-

It isn't too long before Marilyn knows that the Sanzia demon is trying to possess Jessica (and I really mean not too long), but, like always, no body believes her. They keep this charade up from forty minutes to an hour before we get some action in the last  act and this is where the movie really ticked me off. Let's face the bright light, people, all that build-up and no exciting finish just makes this a very big cliffhanger.

The kills are nicely done, but they're not any way unique or special. One lady gets electrocuted in a pool, one man suffers a heart attack, one guy gets crushed by a tomb stone, these are very tame kills and normally I should be okay with that but, again, this is how far they're willing to go even if they have, like, a hundred of these dolls to do the killings! I feel cheated here.

Dolly Dearest isn't without its own personal good points albeit the lack of action. First, while trying to be a slasher, it does pass on making its characters more than paper cut-outs as they're going through some changes and they're all reacting fine to it. (If you don't mind seeing a few cheese in your script) Second, the special effects on the dolls are quite impressive despite the low budget. They're may look funny at times but at least they move fluidly and they do make a good impact on scaring the beejezus out of people (with doll phobias).

Sadly, it blindly targets slasher fans and yet failing to deliver even if all the possibilities were there! A factory for the murders to take place in, lots of potential victims, lots of devices to set up as murder weapons, hundreds of dolls capable of being possessed at the same time, and yet they just stopped somewhere in the middle and decide to do some sort of family drama ala Poltergeist (1982) with killer dolls. Dolly Dearest would have been better if they just dished it out and let it be a decent Child's Play rip-off, but it just stuck itself in the middle and settle as an hour and a half TV-friendly supernatural horror.

Not worth my behind, thank you very much.

Bodycount:
1 male crushed by a stone seal
1 female electrocuted in a pool with an electric lamp
1 male suffers a heart attack after his hand goes through a sewing machine
Total: 3
Posted by Kaijinu at 6:13 PM