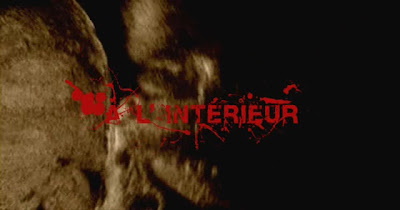 This is one of the many reasons why I hail France as a powerhouse for slasher movies next to America and Canada; in par with High Tension (2003), Alexandre Bustillo's and Julien Maury's Inside is the bloody mayhem of unrestrained terror that even I would admit went a tad too much for my taste, more to my joy.

The movie centers on photographer Sarah, an expectant mother of a newborn child, though she's not as excited about this as any mother would be as she is still bitter about losing her husband from a fatal car accident months ago.

Thinking she needs some time to clear her head, she spends one Christmas Eve alone in her home, still reeling over her late spouse until a mysterious woman comes knocking on her door asking for help. Suspicious, she lies to the woman that her husband doesn't want to be disturbed but things go creepy real quick when the woman claims Sarah's lying and that she knows that her husband's dead.

When the woman tries to break in by going through the house's glass door, Sarah manages to take a few camera shots of the woman's face which seemingly deters the invader away. Soon, cops are called in as they attempt to figure out who the woman was but the grainy nature of Sarah's photos fail to help. The cops, however, reassure her that they'll later drop by to check-up and make sure she's okay, giving Sarah some peace of mind, unknown to her that the woman will somehow find her way in and readies her shears to terrorize the mother-to-be and anyone who will get in the way.

Inside has everything I'm looking for a slasher film: an original and truly scary story, a terrifying villain, and some brutally messy kills with violence so over-the-top, its hard to watch without cringing your eyes a bit.

I love the sense of claustrophobia that surrounds this film as the cat-and-mouse chase all takes place in one single location, while the kill count rises higher with each innocent bystanders entering the house, including Sarah's Employer, her mum, and those cops who promised to go back to her with an added bonus body in the form of a little captured juvie. In its strength, this gives Inside a bit of nihilistic tone and a feel of dread that most slasher films lack these days, even more once the film teasingly reels in to its gory finale.

While the film's violence and atmosphere is its forte, the character "La Femme" is as precious as the gory set-pieces she unleashes; she's creepy as she is deadly, with a persistence to her goal so demented that she's willing to murder anyone with her trusted shears. The only thing that kept her from fully losing her focus is a good cig to light and smoke away. (which was made cooler with this film's artistic photography)

Home Invasions are scary, killing pregnant women is heartless, and a combo of these two makes Inside such a powerful horror film. If it's going to have a flaw, it's gotta be the fact that Sarah's a bitter character to begin with; given that she is still coping with her loss and that we're supposed to root for her with that fact, her sullen and moody personality didn't budge a bit even with the news of a possible healthy childbirth, which hinders us from warming up to her early on. It wasn't until the time when the Woman punctures her belly that we start to feel the tension and choose a side. Of course, given her fate, the ending sums up to something so horrifying that you can't really feel anything for either characters. If you're anything like me, you're just glad that the whole thing is over.

Inside delivers what a fan wants and keeps feeding them even if they had enough. It's one movie that you know you want to watch again some time later, but it's better put it down for a long bit to take a good breather before experiencing the whole thing all over again. (And I highly recommend the breather) 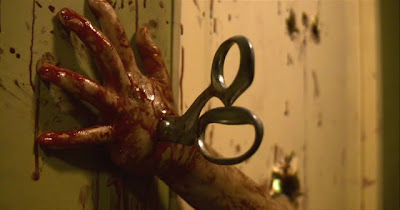 Just keep this in mind: this isn't the best film to watch with your spouse... Or your in-laws...

Bodycount:
1 male had his head bashed against windshield during car collision
1 female had her neck punctured with hat pin
1 male repeatedly stabbed and slashed, scissors to the eye
1 cat had had its head crushed by killer's hand
1 male gets a hat pin to the ear
1 male had his head blown open with handgun
1 male stabbed on the forehead with a pair of scissors
1 baby miscarried (flashback)
1 male stabbed to death with knife
1 female had her gut cut open with scissors, bled to death
Total: 10
Posted by Kaijinu at 10:27 AM