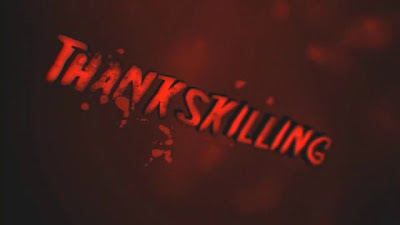 Move mover "Home, Sweet Home (1981)", there's a better "Thanksgiving Slasher" in town as Jordan Downey gives us this little indie terror about a foul-mouthed turkey on a killing spree!


A group of (obviously and intentional) stereotypes were going back to their home town for thanksgiving dinners with their families when, after camping out for the night, one of them points out that the site they're on is a native American burial ground where a killer turkey got banished to, remaining there so long as the totem pinning his resting place goes unremoved. Well, like always, the cliched happens and an old hermit's dog accidentally pisses on the totem and knocks it out of place, reviving the killer turkey and resuming his reign of terror. It's only a matter of time before our Turkey gets into town and kills off our heroes' friends and families, so it's up to them (and a convenient book of spells) to stop him before they're stuffed!

Just as the slasher world couldn't get any weirder, Thankskilling goes forward for manic absurdity and brings us the world's first killer turkey, on the loose, spewing out bad one-liners, killing folks with carving knives, axes and shotguns, and even clumsily rapes (!) one of the characters while wearing an extra small gravy-flavored rubber. He's the main course of the movie, which gets more and more insane the further it goes, and if you think the Turkey's a bad enough character, well, you're probably right, but the rest of the cast do try to be as insanely funny as our killer critter here.


A no-name casts fill all the sorts of slasher characters and potential victims, like the obvious nerd, the obvious fat jokester-slash-beer jugger, the obvious slut, the obvious goody guy who's paired up with the obvious "final girl". (With the latter unable to tell the difference between her father and a turkey wearing her father's face...) If that's not enough, we also got a hermit who is our doomsayer/Ahab-hybrid, out to kill the Turkey for murdering his dog (though, unlike most of them, he actually succeeds at some point), all of them played with the most tongues pressed in cheeks possible for maximum feisty cheese.

Basically, the filmmakers wanted a fun, popcorn flick with lotsa kills, as well as kid around and throw in every slasher cliche to poke fun at. (Remember our little talk of "man of steel" killers? Well the Turkey gets the same treatment too with the help of NUCLEAR WASTE!) They're wise enough to keep it all simplistic, yet goofed-up with outrageous murder sequences and cartoon sequences which leads us to one or two montage scenarios that makes me wanna scratch my head out of confusion and dumbfoundery. (I'm sure dumbfoundery isn't a word, but this is a review about a horror movie with a talking turkey. Live with it!)


Clearly, not your holiday family film with Tom Turkey, with an opening tit-shot of Wanda Lust's sizable melons, turd in a coffee and the most outrageous gore available only in shot-on-video flicks. It's obviously made for laughs, thus I find Thankskilling making my day as bright as a friggin' supernova that's not meant to be taken seriously, no matter how much it burns. It's low-budgeted (the Turkey is obviously a puppet) and paper-thin (the film runs for 70 minutes(!)), but it plays horror, gore and dumbfound parody comedy right on the spot that only ones with a good sense of humor will enjoy!

...Okay, not all of them. (Some guys in IMDB goes so far as calling it awful, but that's the joke guys. Lighten up, ya lawyers!)