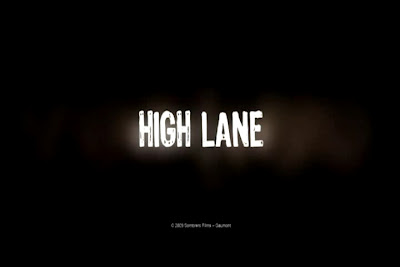 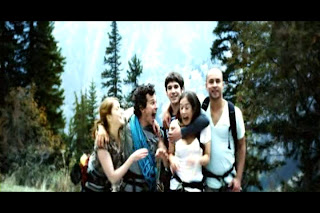 Just when the New French Extremities just became the powerhouse of brutal slasher cult hits, they managed to skip a beat and ended up with this mismatched backwoods horror.

Friends Chloe, Loic, Guillaume, Fred and Karine decided to go on a hiking adventure one summer only to find their trail was closed off due to the path being unstable. But as we all know, no sign that means "Danger! Enter here and I'll tell you you'll be found one morning being ravaged by wolves, bears and, possibly, evil gnomes" will keep these people off and decided to hike on eitherways.

This is when I found out that the film's gonna be bad and not in a good way; just as My Bloody Valentine had that "love-triangle" sub-plot, we have the cowardly Loic eyeing on Chloe, while tough guy Guillaume isn't gonna have any of that even if he IS the ex. Should be interesting, but seeing Loic is such a whiner and Guallaume is a big jerk, I'm not sure myself if I wanna follow this sub-plot. In fact, I can't remember anyone in this movie that I actually cared enough to root for. Fred's a climber and that's it. Karine is Fred's girlfriend and that's it. Chloe's a doctor on a hiking trip with her friends who gets random flashbacks of some guy suffering from a stroke, seizure or something, and that's it. (it's more shallow than it sounds) They're paper-thin stereotypes that lacks any solidity and they're just fresh meat to be picked.

And speaking of which, after a dangerous-trail-gone-worse scene, with suspension bridges collapsing and the usual "bear trap catches the first victim's leg" gig, we finally get our backwoods slasher. Sadly, not even that could save this film's weak story.

Fred gets dragged away by our killer, the group does ONE smart thing and decides NOT to split up. Well, for a while. Soon they did and it isn't too long before they do the usual "go inside the killer's house for shelter because they don't know it's the killer's house" routine and gets greeted by our backwoods nut, Anton.

It's here when we get our average slasher cliche, such as the killer feeding off from one of our characters for food and stuff, and it gets worse by the minute when our "protagonist" came back and fights off the killer. The same kid who have been bitching about his head for the first half of the movie. Then again, if you're gonna get killed off by one of your friends then might as well have your shine.

I know backwoods slashers are always sniffing each others bungholes because they're almost so alike but this one just acts so much like any other slasher film that it's no wonder its so overlooked. They try to make a difference by adding a love-triangle situation (that leads to bloody betrayals...ahh! L'Amour~!) but the attempt's useless if your characters are a bunch of whiners, jerks and a girl suffering from aneurysm. And let's not forget our killer, Anton, who is far from threatening yet so close on being a mongoloid wannabe. Let's face it guys, dirtying up a man and bushing up his hair doesn't make him scary. Just pathetic. (And a little sad)

As a French backwoods slasher it has yet to do better. This isn't the first time they tried making one (Ogroff (1983) anyone?) But I'll be honest, I would prefer watching a Friday the 13th movie or a Wrong Turn entry, at least they TRY to be different while altogether familiar. Hell, even the 3rd entry of the Wrong Turn series is  livelier than this!

Bodycount:
1 female shot on the chest with an arrow
1 male dies from stab wounds
1 male falls to his death off a cliff
1 male gets an arrow shot through his head
1 female falls to her death
total: 5