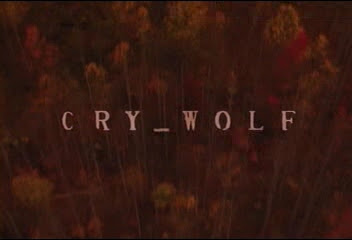 PG-13 horror mostly makes me cringe; though there are exceptions, the abundance of tame gore, recycled plot and overused teen smarts taking the good name of horror overdone can get a bit testy if done improper and/or lazily. So when I finally decided to watch CRY_WOLF (just for a review), I was surprised at how engaging it got despite the lack of proper scares and extreme violence, playing out more as a thriller involving a lie gone wrong than an actual hack-a-thon.

Owen Mathews is the new kid in Westlake Preparatory Academy, coming all the way from Britain. He finds himself invited by a group of high school stereotypes to play a game of Cry Wolf, where he had to guess which one of them is the wolf through means of wit. Owen plays his cards right and wins game, (quickly) earning the respect of his new found friends.

All the while, the murder of a local girl has been spreading around campus, giving the rat pack an idea to hype-up their game and try to flesh out a chain mail containing the killer’s motives and what they look like.

The mail spreads easily via instant messaging, with nearly every student and staff believing it, but it seems like someone has taken this mail to heart as a figure wearing the same orange ski mask and camouflage suit described in the chain mail starts stalking Owen, taking every chance to kill him. Is someone trying to kill Owen for vengeance, or is he somehow being eaten alive by his own guilt?

With an ending somewhat reminiscent of a beloved classic “April Fools Day (1986)”, I understand why so many people were pissed off by CRY_WOLF but, if you think about it, it made a lot of sense and fits the theme of the plot. Unfortunately, the film’s poor marketing lead to the public expecting an ultra-violent slasher film with its trailer when, in reality, the movie is a stylized, out-of-the-blue, thriller with an unexpected, if not unoriginal twist.

Admittedly, the experimental approach worked for me as it concentrated on the psychological aspects of stalking and paranoia, keeping everything far from predictable by giving their own distinctive style of suspense that attempts to build up to a shocking finale. It's a good movie, but nowhere as acceptable as any “real” slashers out there as its whodunit approach could used a little more work.

To keep it short, its not for everyone as the slasher perspective lacks that needed punch in the gut, but its interesting enough to keep you watching.