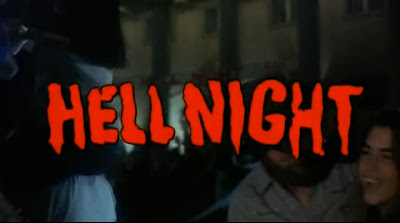 On a dark and party-filled night in the 80s, a group of new pledges (including le gasp! Linda Blair!), dressed in costumes resembling Victorian people, are to spend a night in Garth Manor where legend has it that twelve years ago, Raymond Garth murdered his family out of either a psychological breakdown or the fact that his children were all deformed before committing suicide by hanging. When the cops went in to gather the bodies, they’re missing one mongoloid son, who is now believed to have survived that night and is prowling within the manor’s walls looking for victims to kill.

Armed with a single gun, the four pledges are sent in the manor while the fraternity president and his cohorts try their best to scare them. However, these teenagers will soon find out the painful way that they’re not alone, as someone with a mean cleaver starts to pick them off, one co-ed at a time. As their number dwindles down, who in the end will survive this Hell Night?

Hell Night is pretty straight forward with the plot as an average teenagers stuck someplace and gets killed by a maniac run, but the film’s mixture of gothic house set-pieces and teen-murder spree type of story have its moments of originality for its time and the idea of the whole house supposedly haunted did brought out some atmosphere and even some decent scares. The set up really had a lot of work and heart put to it, which is fairly impressive.

The film also boasts some fairly effective talent apart from Blair and you can actually feel for the characters, may they be the ones having fun setting up the pranks or the ones being victimized by it.

As a slasher, however, the kills are relatively bloodless and plenty off them occurred off-camera but for those that did something worthwhile were pretty intense scenes like one that may be inspired by "The Shining" where a victim was chased all over a garden maze by a sickle wielding killer. There's also a weird twist that didn't exactly shock me all that much for some reason; while I would understand some people may find it surprising since there's little indication to it, for me its a twist that was already used by plenty of other slashers out there and it was just a little too random for me.

I would also consider the film's steady pacing and direction as a flaw since very little happen around the first act except some indication that there is a killer skulking around. Moving curtains and running shadows might build up some fair chills but if it took too long, the novelty nearly wore out.
Still, I wouldn’t say I didn’t have fun seeing the movie; I'm a big Linda Blair fan and she's just too adorable in this movie and the film didn't fail to deliver as a slasher. Hell Night may not be the best out there but no film is perfect and it could have been worse. If you love your slashers with a timeless feel then this is a workable title, but for a true Victorian-esque slasher film, I got my wish granted when I found a certain Robert Englund-starring Phantom of the Opera (1989)...

Bodycount:
1 female decaipated with cleaver
1 male had his head head twisted
1 male gets a sickle to the chest
1 female gets a firepoker stabbed to her neck
1 male shot twice with a shotgun
1 male shotgunned offscreen
1 male thrown out a window and falls to his death
1 male impaled to gate railings
Posted by Kaijinu at 9:00 PM