It came from Outer Space: Without Warning (1980) 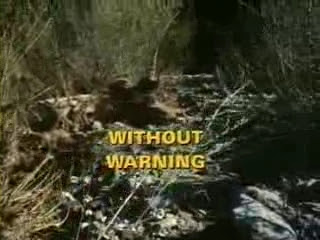 Without Warning (1980) (AKA The Warning, It Came Without Warning)
Ratings: ***1/2
Starring: Jack Palance, Martin Landau and Tarah Nutter

Before Arnold Shwarzenegger gets muy-macho brawlin' against an alien hunter in Predator, we get creepy conspiracies about alien landings on a local backwoods, flying parasites, and humans being hunted for sport.

A mysterious figure began stalking and hunting campers, scout troops and locals using strange alien disks that resembles a cross between a starfish and a leech. The decomposing bodies are then harvested to a small worn-out shack, something which Sandy and Greg, a couple on a camping trip, find their dead friends in.
Fleeing through the woods and finding a town for help, they're met with skepticism and laughter when they tell their story of flying disks and aliens to the patrons of a local bar. (with Jack Palance). One of them, a crazed Vietnam vet (Martin Landau), convinces himself however that these teens are somehow involved to the very same alien he's been hunting down on the woods and now he's eyeing on interrogating them to find his prey. Unfortunately, it's not too long before the hunters become the hunted and eventually, they must find a way to stop the Alien before many more lives are taken.

Without Warning is a film where B-Movie materials were put together in cheap glue; hokey special effects, a wildly imaginative and hammy script, and acting from B-grade stars like Eaten Alive's Neville Brand, Ralph Meeker from Food of The Gods and Kevin Peter Hall as our killer alien (years before he dons a familiar role in Predator (1987)) somehow pumped life to this rather odd movie and gave it a camp value that is popcorn friendly.
But what sets this apart from other low-budget sci-frights of that decade was that its plot and build-up resembles that of a backwoods slasher, complete with POV shots of the killer and some great stalk and chase sequences. The Alien is this film's "boogeyman" for that matter and he's playing it straight as a psycho-killer rather than a calculating mad genius bent on world domination or a wild animal from another planet. He's here to hunt for sport, like a redneck hunter looking for a deer to decapitate and place in a mantlepiece, and when his prey escapes, he's hellbent on finishing what he started. We never get to see the villain clearly early on (again a similar ploy to most slasher killers in the 80s) and the closest we get to seeing its ugly rear was the part when the lamp illuminates its face ala killer's revelation scene from Psycho (1960).

Consider the fact that our killer is not from this planet, the "murders" are pretty tame. It's no gore-fest here but rather they make it up with its lush and creepy cinematography, capturing the lonesome woods at night and the dark shadows that captures the Alien's threatening persona, accompanied with a scoring that captures the backwoods tone perfectly. The only draw back of this film is that it suffers one or two scenes of over-acting, low-budget restraints, and a few pacing problems, but looking over this the movie is swell enough on its own. 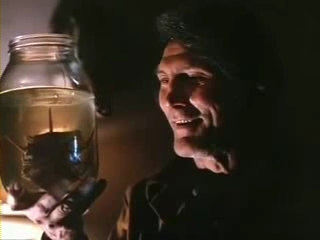 Without Warning is one of the many examples of a well-made cheese-fest that works on a level. Despite the movie's low-brow acting, mediocre special effects and lack of gore, it's a nice fresh take on a slasher-scifi hybrid. Bulbous aliens may not be my thing (I prefer my aliens feral-looking. Like the Xenomorphs from those Alien movies or that eldritch nightmare from John Carpenter's The Thing (1982)) but for a forerunner to Predator (and it's slasher-friendly 2010 sequel Predators), it's a fun movie to see in your local video store and a unique addition for a fan's collection.