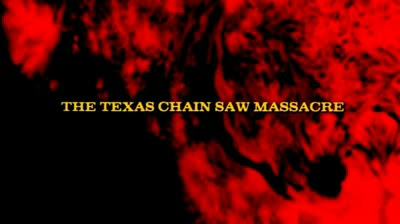 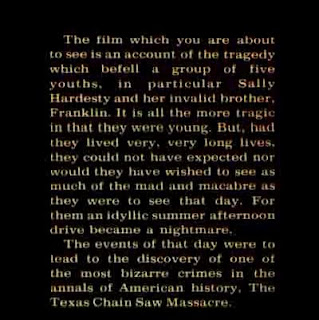 Siblings Sally and wheelchair-bound Franklin Hardesty, along with their friends Jerry, Kirk and Pam were on their way to visit the Hardestys' late Grandpappy's grave, in fear of being desecrated by an unknown perpetrator who had been violating gravesites around Texas.

Upon reaching the site, they met local cowboys getting drunk and fat-heavy on barbecue, as well as a drunk man who claim that there's more to the graverobbing than what it is.

Obviously, we all know any drunk fool saying shit like that is obviously a warning, but our five kids doesn't know that rule too well. So after finding out that grandpa's resting place is A-okay, the kids head back to the van and off to face Texan road once again. Along the way, they spot a lonesome hitchhiker and decided to give ole "Dracula" a ride. Of course, things go from awkward silence to eccentricity as the hitchhiker began rambling about good meat and slaughtering cows, boasting that he came from a family of cattle herders. Franklin enjoys the subject and decided to dive in and started to share stories with the guy, including the best ways to kill a cow by smashing its head with a sledgehammer.

It then goes insane as the Hitchhiker suddenly grabs Franklin's pocket knife and cuts his own palm before taking a Polaroid shot of Franklin (and burning it right in front of him) and cutting the boy's hand with the knife. Thinking the man overstays his welcome, they kicked him out of the van as he smears what appears to be a blood symbol on the car's side.

The unfortunate events continue when the van putters on low gas and the only nearby gas station was dried up on fuel. Luckily (?) for them, there's an old barn a couple of miles down the road and the gang thought they could have the people there help them out with their gas problem. Problem is, this ain't no ordinary house and its occupants are less than thrilled on having visitors...

Fifteen to sixteen weeks, on a budget of approximately $85000, Texas Chainsaw Massacre is exploitation done gritty, raw, and intense. For its time, there was never a movie filmed like this and considering our tired expectations eating up today's creativity, its one of the better examples of how great and terrifying exploitations were when done right.

With a title like Texas Chainsaw Massacre, you can expect the worse to come from a powertool-driven horror movie with the messiest terror ever to exist on film, interestingly without relying much on the gore. Its this film's underlying simplicity that makes it scary; it doesn't show you nightmares, it builds to it. TCM didn't gave the saw as easily around the first few minutes into the film but rather it lets you wait and, once it's shown, refuse to let you go.

Also adding to the terror was the macabre nature of the film such as the psychological and emotional implications of Leatherface shifting masks for one occasion to another, a family of deranged cannibals bickering with one another while skeletons sat next to them as if this was normal, and the ever intense last act where Sally is brought into a literal living hell as they play a "family game" of letting their elder brain her with a hammer.

And then, of course, there is Leatherface; no self-respecting fan will not recognize Texas Chainsaw Massacre as the very movie that brought us one of slasherdom's well known identity, Leatherface. His exploits would later played on and on again in the following sequels, but none of them were as terrifying and as macabre as his character in this film. His family is deranged, and they all act like children despite their appearance. They're impatient, violent, and careless, all the worse if they're pissed off. To make a point, Leatherface is a name any horror fan gets to acknowledge, and understand, which a mask made up of sewn human faces, a chainsaw buzzing as it cuts deep into the bone, wails and grunts that shows pure brutish madness, he's a friggin juggernaut of pure untamed animal violence, and a celebrity among horror fans.

While it may not sound much by today's standards, again for its time, this movie is really gritty as a lot of blood and sweat came to this film, and the blood part is literal as many of the bruises, the wounds and the beatings you see in this film is real. Marilyn Burns, who played Sally, really got beaten by the foam mallet, cuts herself numerous times in the chase scene while running through thorns, sprained an ankle on the stunts, had dye dried onto her skin, you got to give a hand to the dedication she put to this film (plus she really got cut by Gunnar Hansen on one scene. Now that's scary)

The film's Texan vibe is ever present; The blue-collared personalities, the blazing desert-like scenario, the barbecue, but its isolated open fields was one of the film's key figure that made its harrowing imagery infamous and pure cinematic genius. Same, too, can be said to the Sawyer's little hideout; a messy pile of rotting carcasses and decorative bones mixed with litter, showing both the madness of the family that occupies it and their attempts to live a normal life.

Slasher fans often debate whether this or Black Christmas is the one true "first slasher" but for me, it's a matter of fright and date never matters. This film, side by side with movies like Black Christmas (1974), Alice Sweet Alice (1976) and Halloween (1978), are the ones we owe our gratitude for flourishing and establishing the horror sub-genre. If it wasn't for them, we wouldn't have these films to enjoy, and if it wasn't for TCM, we wouldn't have found a useful murder weapon to exploit! (that, and I think that Psycho (1960) is the first true slasher film)

It's a horror masterpiece, that's all I'm going to say. If you don't find it like that, then what are you doing in a site like this?