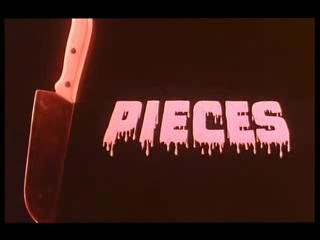 Oh God, I can't believe I went through this one! Okay, I'll admit that it's Bad! Really Bad! But is it bad enough to be GOOD?

Yeah, for a lot of obscure reasons! 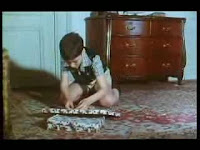 The plot is simple as it is; in 1942, a boy was caught finishing a nudie puzzle when his mother enters his room. She breaks into one hell of an angry ramble about his husband and something about her son being like him. (well, he IS a dude, lady.) When she asks the boy to fetch a plastic bag, he leaves and comes back with an axe, which he buries repeatedly into his mum's head before cutting her into bits and pieces with a saw. When his nanny returns home and felt uneasy that no one was answering her calls, she fetches the cops to accompany her, only to find no mum but a lot of blood splashes all over the boy's room. They then find our murderous kiddie locked in a closet, pretending to be a surviving victim. Sure enough, the cops believe him and he moves in with his aunt.
﻿﻿﻿
Forty years later, someone is cutting up the girls attending a college in Boston with a chainsaw. They call in Lt. Bracken and Mary Riggs to investigate the murders. They suspect it might be an inside job and the perpetrator's one of  the staffs. But who?

It's only a matter of time before the killer strikes again, as more girls starts ending up in pieces with parts missing, as if somebody's childhood obsession of puzzles is far from over.

And that's just as good as it's going to get. I will say a lot of scenes here just doesn't add up. First we got this unrelated death that occurs early in the film concerning some girl in a skateboard running through a large display window. And then, BAM! Next thing we know we're at some garden, in broad daylight and some girl gets her block sawed off with a chainsaw. And yet, no witnesses!
﻿
Want more? How about some Bruce Lee wannabe attacking one of the investigators posing as a tennis instructor, and after he gets knocked out in a fight, he gets up and apologizes to everyone, blaming the attack on BAD CHOPSUEY. I've eaten a lot of chopsuey in my life and none of them ever gave me Kung-Fu powers. And I've eaten the bad ones!

More? How about another unfortunate victim getting chased around in an empty hallway and once she reaches the elevator, she meets a familiar face (though not known to us) and they both went inside the elevator. The thing is the "familiar face" is the killer. You know what else? He successfully hid a chainsaw behind his back. You either have a short of attention span to not see that motor-based power tool behind some guy's back! 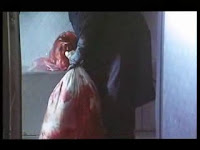 The murders are another reason to like this film. Texas Chainsaw Massacre (1974) may had introduced the chainsaw as a murder weapon but unlike that movie, we get to see the blade actually touch the body in Pieces and the whole bloody moment is on screen! Any true gorehounds out there would love it, any slasher fans out there would appreciate it, horror fans will remember it as piles among piles of dead bodies limp in bits while blood flows like rivers!

As relentless as the film could be, it's one big joke that's made with a wink and deserves our attention. I got a sense of humor, and so do many fans out there who are crazy (yet reasonable) enough to make this film a cult hit. Penned by Anthropophagus' Joe D’amato and directed by Juan Piquer Simon, who later dictates an army of Slugs (1986) into eating people, Pieces is a simple gory treat from it’s opening depiction of matricide to the random mama-Frankenstein attack. Its ideals are to leave logic as a necessity to enjoy the grue, a trait that makes this film more refreshing in each repeated viewing.


You don't need to go to Texas for a chainsaw massacre, cuz Spain's Pieces is just as crazy, illogical and more violent. It make the phrase "so bad it's good" easier to understand, as it is indeed one of "those" films.

Personal note: I never counted the ending de-groining. it's just too random to be taken seriously, even for this bodycounter!

Also, as of late, it appears that the mirror victim and the head-lopping victim are played by the same actress, so chances are they be the same characters. The original draft is that the mirror incident trigger the maniac's bloodlust out of its dormant state, leading to him stalking the girl and killing her in broad daylight. Unfortunately, the editing made it look like they were two separate events, so the bodycount for this would be depending on your take.
Posted by Kaijinu at 2:26 PM