Upon writing this, I recently saw the Fifth (and, so far, the last) Final Destination film and I'll tell you, it was a blast! The film went on as one of the better attempts for a sequel in this franchise and, in the end of the film, even compiled (with added 3D effects) the "best" deaths that happened through out the series. It occurred to me, then and there, that in my journals, I only listed down the "real world" deaths. (yeah, I keep a journal to keep track on the murders and deaths of every slasher film I review. Whoopie-do, I'm CRAZY!)

The Final Destination series always start off with premonitions so, for this countdown, I will be doing something a little different and look at the finest accidents Death has weaved in his little world but got foiled coz some strange otherworldly force gave a random guy a vision.

So, with further delay, here are Final Destination's top 8 accidents that never happened.

8. Escalator Rolling Pin- In The Final Destination 3D, our hero gets a second premonition involving an entire mall floor immolated by an exploding movie theater. While the bodycount was massive, it also has the messiest murder involving Nick's GF being crushed between two escalator gears and it gets a spot in my list for being one of the few death scenes not enhanced by the movie's 3D CGI (or if it was, not that evident.), as well as tapping into my little fear of malfunctioning escalators. Messed-up way to go, indeed!

7. Spinal Tap- And speaking of tapping, in FD3, Lewis Romero, a cocky jock, gets his just desserts by getting his head smashed open by falling weights. But, no matter how good that was, I will still really prefer his premonition death: flinging off from a roller coaster and smashing back first against the tracks. His expression is just priceless considering how much of a jerk he was! 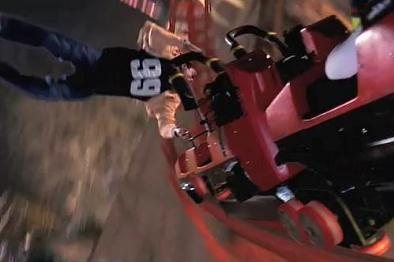 6. Truck From Hell- in Final Destination 2, there's a scene that tickles my devilish side when our heroine, trapped and doomed to be killed in her vision, gets a terrifying glimpse of a man burning alive, calling out for help. No sooner, a literal "Truck from Hell" ends his cries by flattening him. Nice, got me singing ACDC's "Highway to Hell" again! 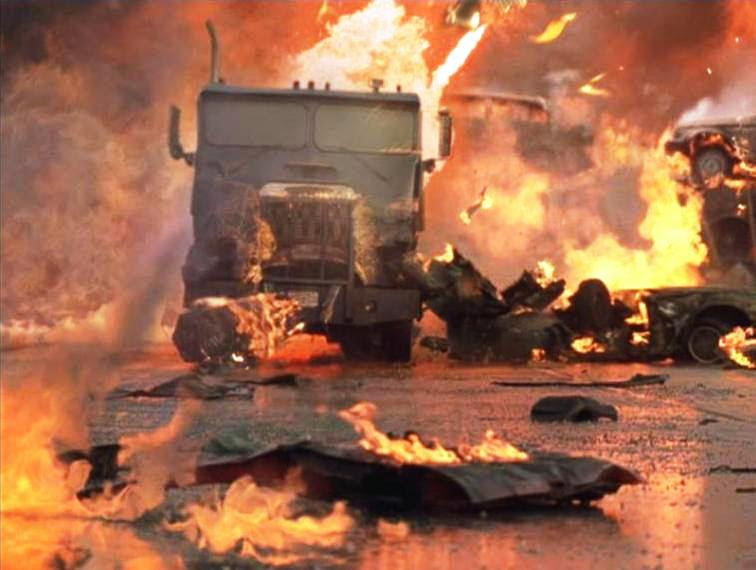 5. Splinter Mouth- Another non-CGI assisted death and a little better than the Gear Crushing in number ten, this another TFD3D death had one poor fella tripping on his back and gets a nasty splinter (or stake) through the head. Simple, yet fulfilling.

4. Flag Disembowelment- One almost-death in our latest Destination that became my instant fave: a shocking number involving a girl falling off from a bridge and getting impaled through a flag pole from an incoming yacht. One of the better CG-assisted deaths from the franchise.

3. Bridge Over-Kill- another instant fave from the fifth. Here, Peter, our soon-to-be-spoiler, meets an overkill that even Death would have been too proud of: after successfully clinging on a bridge's rail, a truck carrying spikes tips and slides one of its haul towards Peter, impaling him from all over. If that's not bad enough, he fall and lands on a pavement first, before sinking into the water. Ouch!

2. Biker Bash- Another FD2 premonition death, a little more personal to me since I got a annoyance thing about bikers. I don't hate them, but the way they try to cut you off when you're unloading a jeep or a bus in my country, not only they can be rude but they can also be dangerous. You couldn't imagine how gleeful when this scene had a biker's bike sandwiching him against a log. 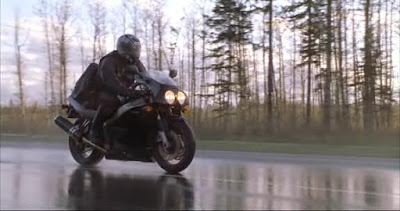 1. Tree Log Face Smash- And lastly, my most favorite premonition death, featuring another messy use for a giant log: as a logging truck's loose chain breaks off and releases thundering dead trees, one of them bounces up and smashes through an incoming police cruiser's wind shield. The death is left for the viewer's imagination, but we all the idea of how messy this death was. (I mean just look thick and large that log was! it's three times larger than anybody's block!) 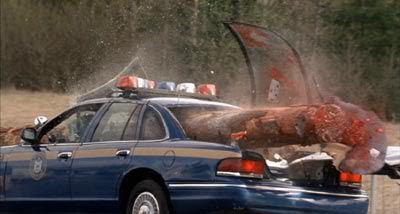 Mystery Power Drill- In the opening of The Final Destination, there's this "mystery power drill" suddenly shown. There isn't any death in the series involving that tool, but judging by its look, it would have been a real messy one! Being a movie-less death, this little bugger gets a special spot in this list as the "only-death-not-to-exist-in-any-Final Destination Movie" death. Too bad they finally ended Final Destination, the big wigs could have done this...or have they?