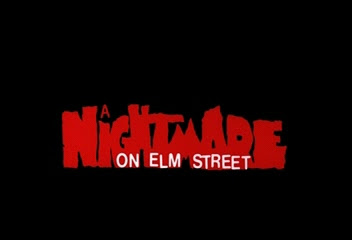 I first heard of A Nightmare on Elm Street from my dad when I was seven and down with a fever; there was a TV special about the ANOES series and my dad tells me who Freddy was and what he does. The idea of a man who lives in your dreams and kills you for real is indeed terrifying to me as a child, but it never got hold of me.

By the time I got my first DVD set (consisting of five movies from the series), I was in high school and I completely overcame my childhood fears. I did, however, understand why it became a classic.

The teenagers of Elm street are having the same nightmare about a man in a striped sweater and knives for fingers, with a nursery rhyme chanting children warning them of his presence. His name is Freddy Krueger and when Tina Grey got one of these dreams, she asks her gate-crashing boyfriend Rod Lane and her friends, Nancy Thompson and Glen Lantz to sleep with her later that night to keep her company. Soon, they all fell asleep and Tina falls prey to Freddy. Witnessing this was Rod who now became the prime suspect as he fled the scene.

That morning, Nancy finds Rod still on the run from the cops, but they managed to catch up with him when Nancy’s father, the local sheriff, used her as bait. With Rod behind bars, everyone expects everything will be back to normal. That is until Nancy became Freddy's new target; nightmare upon nightmare, Kruger torments and stalks the girl in her dreams, as well as murder those anyone around her in pure malice.

Eventually, either out of drunken stupor or guilt seeing how stressed out, Nancy’s mum finally grab the balls to tell her daughter of who’s the man of their nightmares; ole Fred Krueger molested and murdered a number of children back in the days and when enough is enough, the many angry parents of Elm Street placed Freddy under trial. But when someone dumb enough to forget to file a search warrant set Freddy free, the parents took the law into their own hands and trapped Krueger in his own boiler room and set him ablaze. Now, she believes everything is just a bad dream for Nancy, but we all know better.

The border of dream and reality began to thin out, Nancy had no choice but to prepare herself to do the nearly impossible; to fight Freddy in her own terms and end it all.

A nightmare on Elm Street is a fine take on the slasher genre and a successful one at it. The film surpasses many others in its ilk by having a perfect mixture of supernatural horror, slasher nature and a bit of psychological terror as the realm of reality and fantasy is played around in the near end. It’s a rare chance indeed for a film of this kind to be a successful hybrid of all three and, as a big bonus, feature what will be a unique entry to the slasher rouge gallery.

Freddy, to be fair, is a haunting figure; his face hidden underneath the shadow of his fedora, his mocking tone is dark and raspy, his murders are pure blood. He was terrifying, intimidating even, but time has its way and his fans demanded more Freddy to follow this film's success, which unfortunately lead to the character's descent into cheesier realms. It was this reason that this movie fascinates me, how this one nightmare turns into a long line of varying success and transformation; while I still prefer my killers to be silent, bulked and large, Freddy is scary as a mocking bully with homicidal tendencies, and that, my friends, is just as terrifying as an undead man grasping a butcher knife at you. Add the fact that there are very little ways to fully stop him and he catches up on you in your sleep, all the more horror if you ask me.

With the concept of dreams, A Nightmare on Elm Street worked through this with visual imagery that's really unnerving and, even with the budget restrains, visually impressive. It didn't need to do much but it is exactly that why the dream realm in this movie work better than the ones later into franchise; it is grounded with reality and yet it is warped just as anybody's dream would be. You wouldn't know if you were dreaming until something odd comes along the way and this film use this trick to work its villain into the characters and into the scares. While some special effects looked hookey for its time and effort, it's still gruesomely gory and disgustingly graphic much to satisfy any horror fanatic apart from your usual slasher brood.

The film was also a stepping stone to many casts who would later appear in a long line of stardom (yes, Johnny Depp, I meant you), but in the end, it’s all about Robert Englund’s performance as Freddy, a then experimental bogeyman, now a star of his own kind with his face plastered into almost anything you can get your hands on. (toys, trading cards, T-Shirts, he even had his own music record(!)) It was this kind of franchising that turned Freddy into a sellout and his films mushes into piles and piles of special effects with very little story to back it up. As sad as it is for this reviewer and slasher fan, I’ll be a hypocrite to say his latter films were not enjoyable; I still have fun, the mindless violence and the “colorful” dreams is pure entertainment, but none of them brought the real proper kind of scares this film has offered. (Well, none except New Nightmare!)

Released in what many considered as the beginning of the last years of the 80s slasher's Golden Age, A Nightmare of Elm Street not only introduced a franchise and villain that everyone will remember, but it also reminded us the fact that a little imagination is sometimes enough to pull off a somewhat dying idea back from the dead. And while it won't be until 1996 when director Wes Craven save the slasher sub-genre from dying with Scream, this 80s classic of his had done plenty of good for the horror genre.


Bodycount:
1 female slashed repeatedly with a knifed glove
1 male hanged with bed sheets
1 male mentioned burned to death
1 male pulled into a bottomless pit and liquefied into a geyser of blood
1 female burned while being strangled by a killer set ablaze
Total: 5
Posted by Kaijinu at 11:54 AM