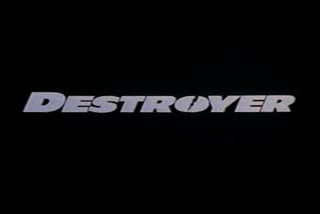 An interesting little cheese-fest, Destroyer is a simple B-movie that, despite its shortcomings, somehow made itself a fun title to spend one weekend night renting.

Hardened serial killer of 23 women, Ivan Moser is sentenced to death via electric chair, a fact he pays very little attention to as he spends every last hour of his supposed execution day fixated at a TV game show. At very moment he is strapped in the chair, though, a short from the electrical system breaks into a fire, leading to an all-out prison riot and the whole place getting burned down. Moser was presumed dead from the fiasco.

Fast forward eighteen months, stunt woman Malone, along with her boyfriend David who's a researcher working on Moser's case file, are part of a filming crew working on a low-budget Women-in-Prison flick "Death House Dollies". The film is being shot in the same prison house Moser was electrocuted at and is directed by some guy played by Psycho's Anthony Perkins.

The filming was going just fine until some people starts disappearing (and dying) behind the camera when it turns out Ivan Moser survived the thousand voltage death chair and was living within the walls of the prison. When half the crew goes out for lunch, Malone's one of the few to come back later and finds creepy messages written for her spelled out in blood and the rest of the crew slaughtered. With an unstoppable powerhouse of a maniac now after her, its only a matter of time before she might end up in Ivan's crummy, bone-breaking hands. 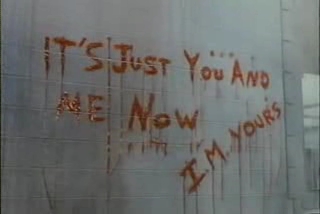 I will admit the movie is flawed. Released in the late 80s, Destroyer is as tired as a fat kid in a ten yard run with its cast (including Anthony Perkins, who I too have to admit saddens me to see a legend in a low-budget vid like this) running stale characters lacking any real personality and decent lines. They're forgettable personas already lined up for the fire and by the time they die, we hardly cared at all. Besides this, the rest of the movie is really predictable as every aspect of a B-Movie slasher is followed so religiously, there's barely any surprises here.

The murders could have used some more over-the-top slicing to them, at least show off the killer's "macho-character" with heavy-duty tools like flamethrowers and jackhammers! Sadly, the two slayings involving these weapons are the only two original kills here as the rest are either done offscreen or featured murders that had been done a million times already.

The film also tried to cook up something unique for their killer but the resulting ingenuity lacked any solid explanation or execution. The box called him a genetic freak, a ploy used to explain the Moser's under-discussed survival under the electric chair but there's barely any scenes making any reference to this. He is simply there, slightly burnt, enjoying his TV whenever he is not killing and we are simply left with that.

The last third of the run involved a lot of chasing between Ivan and Malone; the chases are fine, its just as good as any other climatic cat-and-mouse scenes I've seen but it gets tiring eventually albeit some good stunts, mulling over the fact that so much of this act could have been given to more memorable sequences or gory deaths. And in a lame attempt to shock us, we got the whole "shock-dream" ending, just like in Carrie (1976). (Geez, don't we all have enough of those already?)

All in all, Destroyer isn't a bad film, but it is far from good. It's common enough not disappoint but, at the same time, too common to be remembered for anything special. I strongly suggest just renting this: if you find it a good watch, then you'll have the memory of it stuck on your head forever! If it sucks, then at least you don't have the burden of trying to rid a thing no one would buy.

Bodycount:
1 male had his neck crushed (dream/flashback)
1 male burned alive with welding torch
1 male gets a jackhammer to the gut
1 female strangled with sash
A number of crew and actresses presumably killed, blood seen all over the set.
1 male seen hanged
1 male head found in a copy machine
1 male electrocuted to death in an electric chair
3 males and 1 female found dead
1 male bashed on the head with a rock
1 male immolated
Total: 13+ 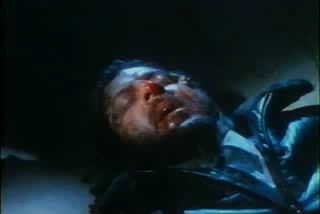