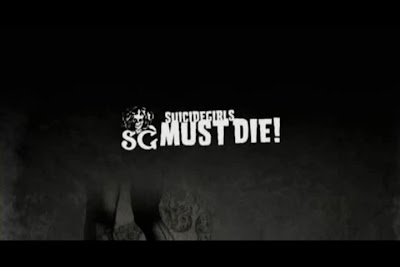 Okay, first of all, I'm not a Suicide Girls fan. I see their ads, I saw their site, I saw them in comic book form in an issue of Tim Seeley's Hack/Slash comics, but I was never a fan of body piercings and tattoo covered bodies. But even so, I'm gonna judge this film as fair as I can, and the only way to do that is to pretend these girls are ordinary girls doing a sexy calendar photoshoot in an isolated cabin; but its gonna take more than T&A to satisfy me.

The plot is simple, fifteen nude models for Suicide Girls.com goes on a road trip to an isolated cabin in the woods (again with that). Their exploits are all recorded via live camera ala Big Brother or Jersey Shore (or any reality TV shows out there showing obnoxious brats acting all crazy for attention). Along the way, they gave a bad impression to the locals by peeing in public (!), which brought all the way to the local sheriff who now is just as pissed off as the locals. Well, they did made it alive to their cabin, and no sooner on the next day, they started shooting. Bikini tops and bottoms flies away as these punker girls gone nudie and cameras starts taking pics. Well, that's just about it, until one of them disappears, one of them nearly got lost, one of them got bound to a table and splattered with blood. Weird stuff starts happening and somebody -or something- is killing off the girls. When seven of them are left, they decide to split up and look for help, which is obviously a big no-no, but they did anyway. Its not too long now before the killers show up their ugly rears...

The concept is good, but unoriginal. We already got "reality TV horror" like this such as My Little Eye, and they're better. For the first sixty minutes we see how whiney, pissed-off and just plain brash these girls are that its hard to feel sympathetic to them. Pissing off locals is never a good way to start a film, but they did and they expect us to feel sorry for them by the time half of them were axed to death.

Another thing that didn't work on this is the crazy plot twist. Look, I'm all for fake deaths and happy endings, but seriously, all that murders you played on us and none of it is real? Well, okay there's that, but then again, who cares? These girls are better off doing photoshoots and calendars than making movies like this. It just doesn't work if the victims aren't likable in the first place, it kills off every expectations or suspense this film would had offered and you're just wasting your time rooting for these girls to die. And even if they do, the murders are not worth the wait. And just to slap our faces to insult us, they gave us the most uninspired looking killers out there: Bush People. Yep, living, humanoid bushes...the plant, not the...you know what I mean.

Fans of Suicide Girls would definitely adore this; I've seen reviews in IMDB and most of them who gave this film a passing mark are fans of the girls. Fans of nudie photoshoots would also like this. In fact, is this even a horror flick? The only thing closest to horror here is seeing a pair of tits with both nipples pierced. (seriously, people finds that hot?)

As far as I'm concerned, this movie is a wreck, but if you want titties with inked skulls and ravens, then go ahead and see this film. Wish you luck.