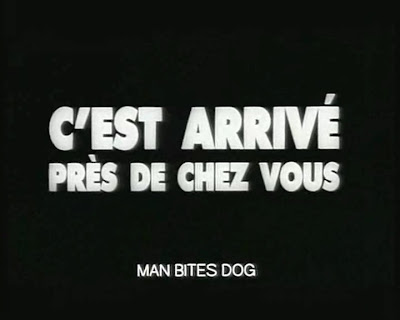 I've got a thing for documentaries; whether it's about nature or alien visitations, the weirder, the better. Man Bites Dog came to me out of sheer curiosity, out of childhood readings of this title from the internet, as I start to recall my fascination to this title and I see a number of things I would enjoy:  a hefty number of killings (by a blunderbuss! I've got to get myself one of those!), some child murders, an old woman scared to a heart attack and a rape scene. Surely, it was a go-signal for a search.
In this Black and White Mockumentary, we follow Ben, a sly and well-educated man who's into poetry, architecture, classical music and serial killing. His world view and murders are being recorded by a film crew of four, who at first, heartless viewers of Ben's "craft", but as the carnage dwells deeper, they began joining in the "fun" themselves.
While not altogether a slasher film, it has a lot of good stuff to keep a fan interested; we get plenty of home invasion scenes in the vein of "Henry: Portrait of a Serial Killer (1986)", where Ben managed to kill an entire family (including a very young boy!) without using his trusted gun. Comparing this to the afore-mentioned 1986 film's scene, it has more action, succeeding to be just as shocking and brutal (the boy was smothered to death with his pillow. On camera). I love myself a good home invasion and this scene is just as good as any other.
Among some of Ben's other memorable works includes an elderly lady who lives alone in an apartment, letting Ben and the crew in thinking they're documenting "loneliness", only to be driven to a heart attack when our killer screamed at her, left her to fade away and proceeds to rob her. Call me heartless, but I find that kinda clever.  As the story continues and Ben's killings becomes more motiveless, dark and very unnerving to the point that we begin to see his inner flaws as a human.

After a failed attempt to kill a postman, a series of events had led to his capture, and even after his escape, he began receiving "death threats" from an avenger who had began killing off his own loved ones. Ben is now reduced to a lowly criminal who is now running from the law and an unseen assailant after them, and this is what makes Man Bites Dog an interesting movie.
The movie dwells in realism and comic of darkly proportions. Soundtrack is absent, cameras are held amateurish, the kills are brutal even if they're mostly spree shootings with the thriving victims trying to get away from them makes the film's notorious. The focus of the movie's a twisted moral later influenced films like "Behind The Mask: The Rise of Leslie Vernon (2006)" or "How to be a Serial Killer" (a movie with similar theme, but a lot better), trying to mold a character that makes his infamous deeds more engaging and digestable, all before reminding us that these killer are in fact, no matter how charming they can be, monsters. Giving example to this would be the dreaded break-in/rape scene where Ben and the crew men, drunk, invaded a home of a couple and, after gang raping the wife, murders them both off camera. The result is gruesome: the aftermath had entrails splattered all across the room while the culprits slept peacefully on them. At that point, Man Bites Dog blurred the line of acceptable grue humor and total uncontrolled monstrosity.
Man Bites Dog is a horror film with a comic world view of a man who's good and boastful of his craft, going haywire as his skills becomes his very flaw. But at the same time, it heeds as a satire to the relationship between viewers and the violence they see in media, on how much we can remain desensitized. It's complicated, but you can see the  hints (or not. I'm a Journalism major, not a psychologist), nevertheless it's still a scary ride to an uncontrolled mayhem; mainstream for some, gem to others.