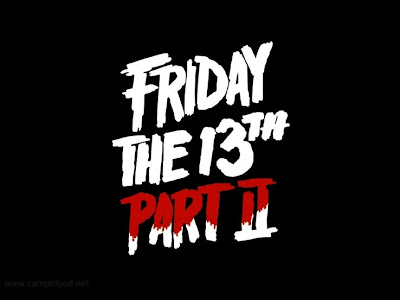 Location: The quiet suburbs, Mid-Evening. Alice, the surviving counselor from the last movie, is having a nightmare/flashback  of her last encounter with Mrs. Voorhees, the deranged mother from hell who, in murderous rage, blames the new counselours back in Crystal Lake of her son's unfortunate dorwning.
﻿ 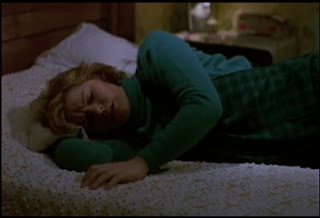 Waking up from this nightmare and still shaken from this experience, Alice tries to calm herself with a brief chat with her mum over the phone, a quick shower and some nice hot tea. But before she could grab a carton of milk from the fridge, something in it tells Alice that the past caught up with her: Mrs. Voorhees' disembodied head!
As she screams in horror, someone then grabs her in a choke-hold and rams a sharpened screwdriver into her temple, apparently out of vengeance.﻿
And cue opening Titles.

The film continues five years later, with two lost teens on their way to a counselor training camp,  phoning their buddies for help. We then have old Man "Crazy Ralph" warning them again of their doom and soon enough, they got their lift from their friends and went on to their trip, again paying no heed to these warnings.

At the camp, course leader Paul instructs the new meat with small talk (including impalements...for some odd reason.), meet up with the two lost teenagers, and catches up with his girlfriend, Ginny. Fast forward to a bonfire at night, he then tells the campers (and the viewers who're unaware of what happened on Part 1) of the tragedy and "curse" of Camp Crystal Lake. His story is pretty much like a briefed version of the entire first film, except of a small detail concerning Jason: surviving his drowning, the boy would later live on his own deep in the woods, scavenging to survive and would later grow up a large hulking man. That one Friday the 13th night when his mother go on a killing spree, legend has it that he saw his mother got beheaded and vow vengeance to any teenagers who enters his forest, killing them all just as they killed his mother. 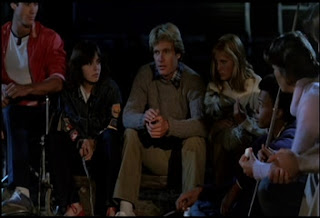 And cue prankster with a cheap latex mask.
After the ghost stories, the campers are ready to call it a night; all the while Crazy Ralph, skulking around the camp, got his own doom saying paid off with when someone garrotes him, rather than the "doomed" teenagers. (I guess being a doomsayer was never a good thing to begin with.)

The next morning went on as usual, more training and more talk, and a random cop chasing our killer on foot only to end with a hammer claw buried into his head. As night falls, most of the counselors in training decided to crash the local bar for some brewskies, leaving a few to watch over the house. Unfortunate for them, someone else in the woods had crashed in and began picking them off one by one, until Paul and his girlfriend Ginny returns and finds the cabin empty and their beds covered in blood. Catching them off guard, the killer attacks and knocks out Paul and pursue Ginny to you usual cat-and-mouse chase, through cabins, through the woods and finally to our killer's's hermit house, where Ginny finds a candle-lit altar made for the late Mrs. Voorhees.
So, it turns out Paul's right about Jason surviving his drowning, and now he's out for blood; but a small battle of wits then ensues, with Ginny putting on dear mum's sweater and talks like her, confusing Jason long enough to prepare hacking him with a machete. That was until Jason spots mum's head and, now knowing the better, retaliates, attacking Ginny once more until Paul, surviving the previous attack, comes to her rescue. As the two mean wrestle, Ginny reaches for the machete once more and finally buries it deep into Jason's shoulder, seemingly killing him. The two counselors then limps back home, stays in one of the cabins to shake the ordeal off, until Jason crashes through one of the windows and drags Ginny out. The screen then goes white...
...and cuts to morning, with Ginny being pulled out in a stretcher to an ambulance, in a state of confusion. Whether the attack really happened or not is beyond us, but one thing is certain, Jason is still on the loose...

Friday the 13th Part 2 cues Jason's first appearance before the franchise began exploited his presence and his rage-fueled killing spree.  It's a fine addition, as it directly followed up from the first film, all the while standing firm on its own story. It's essentially full of the basic slasher film clichés you'll likely find in any other of its kind, but there's a good structure to the flow, and there's enough shocks and exploitation thrills to make this sequel a reasonable favorite among fans of both the series, and the entire sub-genre itself.
The film's strong points would be on two aspects: the first appearance of Jason (played by Warringtton Gillette) and Amy Steel's performance as Ginny. Technically, all the actors were good, if not great, as they fleshed their respective characters likable and interesting enough for us to care for them. But it was Steel's role as Ginny, despite her little roles in the first half, that stole the show with her sudden transformation into a tough chick who's quick on her feet and bears a strong will to survive against Jason. I would dare to say the character's a little better than Alice from the first film; among all of the "final girls", she is the most popular for these reasons alone. (Let's face it, she's the only one who managed to make Jason "Obey" her calmly. Did young Tommy Jarvis made Jason to put down his machete? No, Tommy got him fazed and distracted, that's all...)
Jason, on the other hand, is far from the hulking undead killer everybody is familiar with by now. He has a long way to go before he gets chopped up with his own blade and revived via lightning surging through his veins. Hell, he's even one movie away from getting his iconic mask! (His face was still hidden, though, but he looked a lot like the Phantom Killer from The Town That Dreaded Sundown). But Despite this, Jason is still strong, silent and angry; he may look odd and "young" but he's our killer deep inside that potato sack.

His identity here, however, is still a puzzle. Considering the fact that he's a psychotic hillbilly/red neck loon (well, that lumberjack jumpers made him look like one), that still doesn't explain why, if he had survived his drowning, he didn't went back to his mother and tell her that he's okay? He could have saved his mother from her own demise if he had at least shows himself to her. Why hide for all of these years? Every fan has their own theories (including me), answering this, but the mystery is always the fun part of these films because of its "it's just is" nature and the point that the continuity of these movies isn't their strong point anyway. (Don't get me get started with the fact that Jason just happens to know where Alice lives before killing her. Was I supposed to believe he just looked up her address in a census, rode a bus full of normal looking people, to a suburban neighborhood and paid the bus driver his toll before stepping out?)
The kills, however, got a bit of controversy, and not just because they're gory; hardcore slasher fans would know a film called A Bay of Blood by Mario Bava and, incidentally, the Italian proto-slasher has two (or three) similar kills including the infamous "Kish-kabob" murder and "Facial split" murder. The kills are executed with similar style and effect works, though the ones in Bay were gorier and shown longer on screen. This case didn't seem to matter much to fans, and as any slasher film released in the 80s, Friday the 13th Part 2 had cut much of the blood work, much to the dismay of many fans, to avoid the MPAA's reign of terror. Still, the impact is still legendary, including to what is considered to be the darkest Jason kill to exist, involving a young man in a wheelchair and one facial!

Much like any other film in this series, it's harshly panned by movie critics who prefers their movie viewing one with the masses, but for us fans of the grue, it's always going to be loved. It may not have Jason in his iconic mask, but it's just as good, if not better, than any of the other sequels made for this series, or any other good slasher film in its decade.

Bodycount:
1 female gets a screwdriver sticked to her temple
1 male garroted with barbed wire
1 male gets a hammer claw to the head
1 male had his throat slashed with machete
1 female knifed (offscreen)
1 paraplegic male gets a machete buried into his face
1 male and 1 female double impaling with spear
1 female knifed on the gut
1 male disappears, presumably killed.
total: 10
Posted by Kaijinu at 3:34 PM