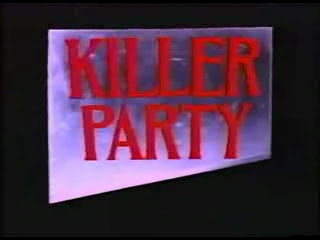 A close call of being over-cooked cheese, Killer Party is one slasher/comedy that brings out more comedy than horror in a sense that it took its time building to the slasher gags we all know and love, only on a hamminess level shot up high.

It starts with a funeral wake, where one dead woman is getting her last rites read out by a very gay priest as her loved ones weep. After the proceedings, one of the mourners decided to stay and, with the body about to be cremated, seeks the opportunity to say her thoughts about her; turns out she HATED the woman and she bad mouths her until a pair of hands springs out of the coffin and wrangles her inside. Looks like the old bird isn't going down unless she takes someone along with the ride and found one so deserving of that. As the coffin is set down to the crematorium, two morticians (dumb enough to not notice the shaking) places it into the oven, burning the bodies alive and-

A girl is a drive-in theater is wigged out by all of this. In a film-within film turn, we now have this girl April snuggling with her rather aggressive boyfriend. Thinking that the movie and her mate is enough to bear in mind for one night, she step out for a while to get some popcorn, grabbing a free one from a suspiciously deserted snack bar. Upon her return, April finds her boytoy's mobile empty and teases him around, but got no reply from anywhere. Just before you ask "is this the part where we see the first murder?", our leather coat-clad boy comes back, drooling and ice pick at hand, and charges at his girl and-

Cut to a music video. In fact, that whole "film-within-film-within-film" thing is a music video by some band called "White Sisters", rocking out in their 80s hair and retro-background, singing their song "April". (which ain't half bad actually).Now we can conclude that we're watching the real movie (I'm sure) when we see a lass with coke-bottle glasses watching the video on her tellie, before being called out by her mum that her friends there to pick her up. To make things a little more cheesy, we now get treated with our heroines in a bike ride, accompanied with the most drug-infused opening song I've ever heard. It's like listening to Bananarama or Cyndi Lauper stoned with pot laced catnip.

Hoping to join an exclusive sorority, our trio, Vivia, Jennifer and Phoebe gather up the guts to pledge said sorority (by getting themselves egged for instance) and are surprised to find out that they actually got in. Their first task as new members is to help out on transforming a local abandoned house into a habitable April Fools Day Masquerade mansion, filled with gags, pranks and a working guillotine. The house, however, is no ordinary house: not too long ago, a prank took the life of one fraternity member in that same house.

And that's it. Not much after that actually.

So, comes the big night, all those invited are donning costumes of different kinds and a prank gets to be played for each of the unsuspected guests. All the while a madman in an antique deep sea diver gear is offing anybody at arms reach. Who is this fella? And why is he killing people? How the hell does he move so quickly wearing that thing?

Too much partying and no murders makes Killer Party a rather dull slasher, at least around the first hour and something minutes. Lame gags and pranks pulled on authorities and faculties in all of its 80s flavor are all we get from all before ten to twenty minutes of eight quick murders at the last act. I'm normally okay waiting around for an hour before the mayhem starts, but the thing is there is NO mayhem. Just some nut killing people with most of the gory goodness done off-screen or had its "executions" cut off before we see any real impact. After finding three bodies, our heroines (well, what was remaining of them) start panicking and tries to get out of the house, which should have been easy if it wasn't for the film's own little twist: the killer's a demon.

Yep, approximately fifteen minutes of slasher bodycount suddenly turns into an "exorcist" wannabe, with the possessed doing deep voices, foaming from the mouth, walking on walls, tossing tridents that collapse (hollow) walls, it's one crazy twist to be honest.

But as crazy as it all gets, the ending somewhat makes up for the lack of decent slasher slices due to the matter that it's funny. In fact, the whole film is forgivable if you see it more as a comedy. (hence the passing rate I gave it) By the time of my second viewing of the movie, I loosen up and inhaled its cheesy charms. It's a weak slasher but, despite the decently-high-but-vaguely-seen-bodycount-slasher-element this movie have (I have to face the light on this one), its laughable enough to poke fun at.

It's pure cheesy goodness, if not a little too cheesy for its own good, Killer Party is a hoot of a horror film to watch if you're struck in the right mood. Serious-minded horror fans should shy away from this one, unless you're willing to loosen your lawyer ties like me and join in.

Bodycount:
1 female burned alive inside a coffin (film within film)
1 female bludgeoned with death with wooden oar
1 male electrocuted through an ear with live wire
1 female speared with trident
1 female brained with hammer offscreen
1 male beheaded with guillotine (mostly offscreen)
1 male had an arm lopped off with machete, later found dismembered
1 male gets a harpoon shot to his arse
1 male found with a spear shoved to his mouth
1 male found dead in a bathtub with a corkscrew to his head
1 female impaled with wooden stake
Total: 11
Posted by Kaijinu at 4:37 PM