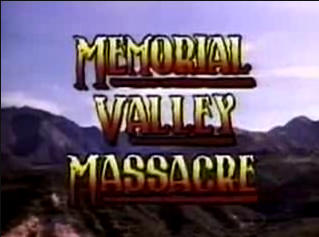 And to think I've seen the weirdest slasher villains out there; I saw evil robots rampaging in malls, killer crocodiles that know how to move cars into rivers, spirits of evil witches hammering stakes into heads, a vengeful nerd in a jester mask, transsexual girls cutting people's heads off for all things, so what else am I missing? 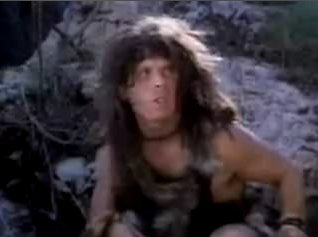 What about a wild man?

It's a big day for camping as many enthusiasts in trailer homes line up to a new site being made in Memorial Valley. Unknown to them though, site owner Allen Sangster has been dealing with some strange on-goings including dead dogs in wells, an "accident" killing one of the hired men and toilets not working. But giddy about the new campers who are eager to spend cold hard cash to just lay around and relax, he disregards these problems anyway and orders his chief ranger to let the camping happen.

Further unbeknownst to them, some randomly placed wild man (!) is watching these colorful (AKA weird) characters mess up his forest with dancing ( GASP!), drinking (GASP!), loitering (GASP!), chatting (GASP!) and worst...riding a buggy around his green green grass of home! (OH, THE HUMANITY!) When he's seen enough of these campers' antics (and awfully written conversations..."Chuck You, Farlie?"), our Caveman-Tarzan-Hermit goes bad jungle man on them and begins hunting down those that disturbed his land.

Memorial Valley Massacre is a truckload of cheesy antics trying to breath a new life to the common backwoods slasher. It's a rather basic run with the usual cliches, from over-the-top variety of characters including Vietnam vets, rock stars and one fat biker, to the methodical killings that doesn't really look all that inspired, much to staple its status as a B-grade home rental where its only winning factor is its "unique" villain.

Anyone who would try to look into this film seriously? Just don't. It'll save you a lot of time and spare your poor brain cells from overthinking this. I mean, just ask this yourself: would you find a horror movie involving a killer jungle man "frightening"? No, I really doubt that. As far as cheese and obscurity goes, Memorial Valley Massacre is a half-and-half movie of either good or bad cinematic "attempts" that only the right audience can fully appreciate. Personally, I sure find it funny enough to at least "like" it, but it is still a bogus concept.
When it comes for bad hair, fat bikers, mobile houses being blown up, and the cheesiest slice of B-movie criteria, Memorial Valley Massacre has it all. Fans of bad 80s "horror" obscured to the point of no return, or just those wanting to see something completely out of the ordinary, pop this Poppa for the night and enjoy the cheddar~!