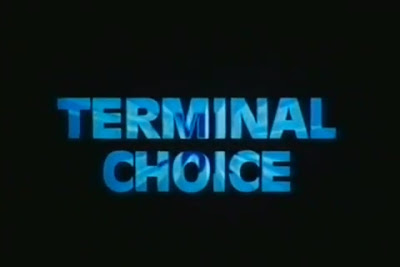 Set in the future where a high tech clinic is run by terminal computers that control every operation going on, it seems that due to the fact that the staff has barely anything to do, they pass their time by breaking a few ethical rules including betting on which of their wards will bite the big one first. When one patient, suffering from a bladder infection, dies from severe hemorrhaging due to an unknown substance placed in her medication, some action were to be expected to get into the bottom of this.
In comes Dr. Frank Holt, who never trusted a single computer and whose bitterness towards the idea have his peers batting him with a sarcastic eyes, perhaps enough to make sure he is to blame for the bizarre accidents that begins to plague the automated hospital. Putting Holt in pressure, he has no other choice but to go on an all-out investigation that unravels a series of betrayal, murder and unauthorized medical experiments.

Some might argue that this film is not a slasher film and I'm not going to disagree much because I can understand why; Terminal Choice has no human killer and the murders were done through sabotaged machines rather than hand-held weapons. And yet, it does contain some slasher overtones and a workable mystery that can keep seasoned fans glued; who is doing this and why are the big questions presented before us and it's cleverly executed to keep you engaged as the more conspiracy begins to unfold, more victims start dying from "accidents".
The murders in this film, while not very "slasher-like", still passes my expectations by tapping into the fear of putting your life to the trust of total strangers, this time not of man, but of machines. The idea of your weakened state taken into the advantage of the killer may have been done already in similar flicks like Hospital Massacre or Visiting Hours but in here, it's more chilling as it is done by automated machines. When the kills happen, they don't keep it simple: patients will try to squirm to get away, blood soaks blouses, people cringe as it gets to them that they're dying, there's great tension built for each of these deaths, in turn, which eventually goes on a full blow by the time our dear doctor friend got himself injured and left at the mercy of the madman and their machines.

It's a shame that this movie is often overlooked because for a thriller, it delivers what most slashers fail to do and that is creating clever variations from the usual bodycounting while keeping the tone in check and the murder-mystery fairly scary. The acting is solid and though the pacing might get a little slow by the middle of its run, it pays off quite fairly at the last act.
Terminal Choice is one movie that's aware of what it is and tries to give what the fans want: a bloody slasher film mixed with a crime-thriller style mystery. Find it and see it, you wont be disappointed.