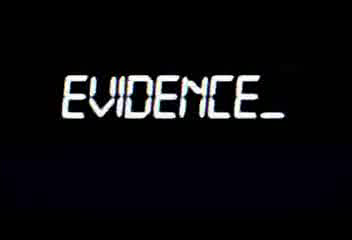 A documented piece of "evidence" of what happened in a forest some place far far away; four young adults goes to the woods to give a friend a good time camping, since this is his first time to do one, and one of them documents the momentous occasion for laughs. A few miles steps away from their parked RV, the group began to hear strange noises that night, and shooting something misshapen (and moving) with their camera. Tension began to rise when they find their RV smashed and violated, and one of them failed to return to camp. It wasn't until when the two girls are left alone when the figure lurking in the woods comes out, but even by then, the creature is far from anything we'd seen before, and so does the next scenes.

It was a hunch, but knowing this is gonna be another recycled found-footage horror, I expected the same gigs to be done here; people documents their trip, something strange happens that doesn't go their way, people panic, even more strange things happen, people continue panicking, something uncommon comes out, running, killing, people dead. Same can be said for this, only it's a little better than most of other DTV found footage.

Like most found-footage horrors, one cannot deny the pain of going through the first parts of the movie which is very tedious,boring and with almost nothing happening, the whines, shouts and arguments of the characters would again prove many points that the scripting of the movies of this kind can be a tad dubious. Albeit Evidence's script had more thought in it, as in for the sake of developing their characters, one can say that it might be worth hogging through to see that clustered, and may I add curious, second half.

For once, the DVD cover didn't lie, it definitely shook us out from our expectations and gave a new turn for us to see and feel tense about. The lack of any explanation to what's really happening in the latter parts gave this film a bit of "realism" despite the absurd monstrosities that continues to barrage the camera, plunging us into the same situation as the girls are at, who's panic is all understandable and the fear of the unknown played here. We first came to believe this is going to be a backwoods horror of some sort, with a stranger crashing in their camp, and a shot of a nude man running across the forest, the next thing we see are some wide array of creatures that resembles the "Gorilla Aliens" of Attack The Block, only green and mossy looking, but it doesn't even stop there. It's a long shot of a twist, but the latter act involved military bunkers, human experiments, maniacs in gas masks and even zombies. Not entirely sure what's going on, but I guess that's the movie's charm, and the one thing that makes it scary and suspenseful.

Evidence had some good sense of production and direction for a DTV horror. The sound were clear and so does the picture. Gore effects are handled with either practical or CG enhanced effects, with one particular head shot that I'm sure will stick to everyone's mind. Kudos for the set designer, too, who gave out some awesome looking locations that gets grittier and grittier by the minute.  The obvious traits of these kind of movies would be their questionable reason to carry the camera with them all the time even if the shit starts to hit the fan real bad; it's often silly, but we wouldn't have a movie if they didn't, don't we?

I'm not gonna say this is going to be the next Blair Witch Project or Cloverfield, but I am gonna applaud this film's ability to fool us into thinking the expected. Some major tweaks on the scripting, but overall, it's a decent foray to this ever-multiplying number of found footage horror. Worth a look.