What Lies Beneath The Floorboards: Coffin Baby (2013) 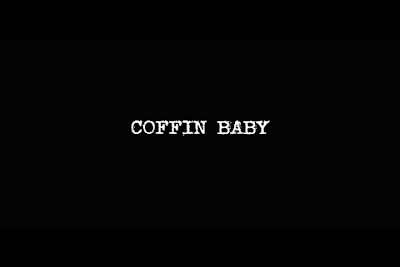 There's something very off-putting about this movie and I ain't just talking about its tone.

Coffin Baby, the supposed sequel to 2003's Tobe Hooper directed remake of the cult fave The Toolbox Murders, finally made it through production and features us a story about an abducted young woman who goes through countless days held captive and tortured, (physically, emotionally and psychologically) as she's forced to watch her captor, the titular 'Coffin Baby", murder (and even eat) other kidnapped victims. All the while, police are investigating the brutal murder of the abducted girl's sister, looking into both girls' personal lives and secrets, finding out there's more to the victims than what they imagined.

Concept-wise, Coffin Baby has some interesting tidbits that definitely could have worked but, with the film suffering from a lot of drawbacks, it all utterly crumble pointlessly at the end of it all. It's best to do this review by citing another movie that suffered a similar fate in terms of franchising; remember how Wrong Turn 3 apparently stepped down drastically by limiting it's budget and changing the format of the movie from three to just one killer? Well, Coffin Baby kinda did just that: while the 2003 remake was a straight slasher film with a well executed direction that hid its budget, the title here shifts to something more of a psychological horror film with added slasher elements, unworkable for a change since the low budget got way too obvious thanks to the film's lazy editing, uninspired pacing and very boring characters.

Heck, even Coffin Baby himself is less interesting here than in the last movie; nothing changed a lot on his behalf, but I'm still confused to what are his reasons for keeping the girl captive. Sometimes he feeds her and try to be a good host, sometimes he simply tortures her just out of anger. What again was the point of all of this? We don't know and apparently, so does this movie.

Since the movie mostly dwells around two acts, the cops investigating and the slaughtering at Coffin's crib, both acts very uninspired and no characters are sympathetic enough, I find it real hard to enjoy this film without feeling a bit downbeat every now and then, especially with the kind of ending this film has.


Still, there are some good things to come out from this film if you're very shallow; the gore level is nasty and the kill count is monstrous, albeit most of them are just bodies shown at the halfway mark of the film, apparently victims from offcamera massacres. Some good cinematography here and there, plus an impressive end credits animation. There's also a decent stalk chase at the climax, but I didn't like how it ends as it's just damn confusing. (Spoilers, the lead somehow developed a sixth sense and saw dead people. As if why she's being held alive in the first place wasn't confusing enough...)

If you like cheap artsy-fartsy, psychological flicks with mountains of rotting limbs and people cannibalizing on them, despite how horrible is the execution is, then Coffin Baby is your turkey leg to choke on. Everyone else who would like to keep their sanity and just enjoy a silly-yet-good slasher flick? As in a REAL slasher flick? Look elsewhere.

Bodycount:
1 female had her face mutilated with box cutter, stabbed to death
1 male beheaded with wood saw
1 male glimpsed being killed
1 head seen
1 male hit on the head with hatchet
1 male had his face sliced off with hatchet
2 males shot
1 female shot on the head
1 female brained with mallet
1 female had pieces of her cut off, cannibalized
1 male sliced in half through buzzsaw
1 male hacked on the chest with hatchet, disemboweled
1 female seen dead (flashback)
1 female seen being dismembered
1 body seen barbecued inside a crematorium
A number of rotting bodies found inside lair
1 baby girl drowned
Total: 17+
Posted by Kaijinu at 5:13 PM