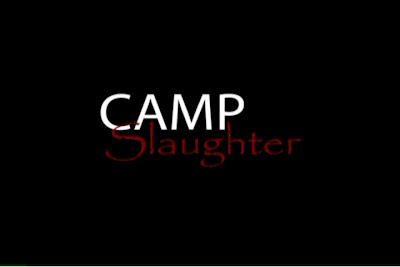 It probably looked good on paper; a slasher film about a time loop and a group of teenagers getting themselves stuck in said loop wherein a string of murders took place. It's an original idea, nobody had done it before, so what went wrong?

Some teens venture into the wrong road one night and ended up getting attacked with mud pies; later in the morning, they find themselves in Camp Hiawatha, where every counselor and campers act and dresses as if they're in the 80s. Before you could say "Jason" (actually, they kept mentioning his name every time something creepy happens that it's annoying... really fucking annoying....), a gloved killer starts bumping off the campers and counselors with some rather uninspired and repetitive kills.

As night draws near to their deaths, our teens see themselves waking up in Camp Hiawatha again, everyone that was killed before alive and well, reliving the same day. Yeah, it's Groundhog Day (1993) meets Friday the 13th. (Part 2,3,4,5,6,7,8...every one of them!) Now that they're aware of what's happening, they decided to help the counselors survive that night in order to free them from repeating the same night over and over again. But is that all there is? Who is the actual killer? Or Killers?

Camp Slaughter (or Camp Daze ) has a lot to offer concept-wise, but its lack of money to budget such a big idea hinders it from being an effective horror flick. The kills are recycled and, I can't believe I'm saying this, too much as we got a lot of unnecessary sub-plots and scenes that are just placed there to heighten up the kill count, such as a "double flashback" that took place in the end and a "nightmare massacre" where one pissed-off play director kills an entire cast after they couldn't do their roles right.

The script is weak ("Jason"... felt like he was mentioned more than ten times...by the same actress...all in separate scenes...) and the acting is off way too many times, but at least it did manage to waver us from figuring out the killers too soon. If done right, the film would had been a mini-cult classic as horror's first time travel-slasher film, predating Timecrimes (2007) and even Triangle (2009). But it flopped right by the time we get to meet the casts, hear the low quality audio, cringe at the bad acing and groan at the really unoriginal deaths mashed together for a film that's executed with a quality that's bad even for a B-Movie!

Not sure about you guys but this film is garbage. At least the producer's Frat House Massacre (2011) was an improvement...