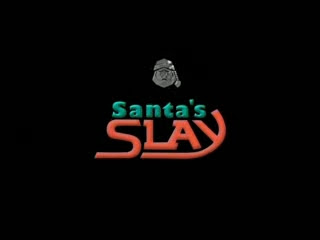 As a kid growing up in the late 90s and early 2000s, I recall a lot of the kids in my neighborhood being big fans of WWE wrestling. Me, being a tad geekier than the rest, never really saw its appeal on the other hand; I saw behind the ruse and knew it was all a gimmick so, needless to say, I wasn't really popular among the little shits. Now being a little older, I, still, isn't that big of a fan of wrestling, but I do know that these men do so much acting on the ring that it kinda comes handy when some of them got movie roles. In this little holiday guilty pleasure of mine, Santa's played by professional wrestler Bill Goldberg. Did he cut to be not only a Santa Claus, but a murderous and supernatural Santa?
Yes, yes he did.

Kris Kringle, as it turns out, was the virgin Birth of the Devil, just as Christ was the virgin birth of God. He terrorized people every Christmas, "The Day of Slaying", until an angel came and challenged him to a single round of curling in 1005 AD. (As in the game where you push smooth rocks to a mark while doing it with a broom. Never knew its ancient importance until this movie...) The Angel won, thus cursing Santa to be the good guy he's popularly portrayed as for the next thousand years. So moving forward exactly a thousand years later, in 2005, with Santa's free to do some killing again.
For some reason that I can't spell out due to spoilers, Santa's first stop is in Hell Township and he's slaughtering anyone he can get his crummy hands on. Meanwhile, Nicholas Yuleson (Douglas Smith) learns the truth behind Santa thanks to his kooky grampa's secret "Book of Claus", but when he tries to warn people that Santa is in town and murdering people both naughty and nice, his claim obviously falls into dead ears. Now seeing he himself must save Christmas by saving everybody else, he tagged along his girlfriend Mary "Mac" Mackenzie (Emilie de Ravin) and his grampa in one desperate attempt to stop the Son of Satan and they're gonna die (or if not, wuss-out) trying!

Flaw is very obvious: story is bonkers, there's zero scares and the gore's not even that bright red. But what can I say? I'm a sucker for campy horror flicks that do other things right on my book. It's not much of a horror flick (really), but rather it's as a horror-slapstick comedy that passes the funnies with flying colors thanks to its B-flick charm, fast pace, and a slim and easy plotting. There's really nothing more to it than just Santa killing random people on a seemingly random town under the plain reason that he's the Son of Satan and has a bit of a score to settle. I guess the one thing separating this movie from your average Santa Slashers is that this isn't just any guy in a suit, it's really Santa akin to his supernatural state, making the film more than your average stroll down the lane for your everyday B-Grade supernatural slasher flick.
Santa's Slay is, honestly, just a fun movie. It's mindless, heavy on the killings, and the story's not really that hard to follow. It's a great horror comedy to watch during the season of hope with yer friends just to have a good laugh. (Better even as a double bill with Jack Frost (1992)) Do yourself a favor and switch off, enjoy the holidays and let the mindless, nonsensical mayhem seep in.
Bodycount:
1 dog kicked to a ceiling fan
1 female faints and falls into spikes, impaled by the neck
1 female drowned in eggnog
1 male kicked into glass case
1 female had her head beaten with table leg
1 female gets a Christmas star thrown to her back
1 male pinned by the hands with steak knives, choked on force-fed turkey leg
1 elderly female tossed off a road in her car by a "helldeer" (more like a HellBull...)
1 male gets a sharpened candycane to the eye
1 male strangled by wreath
1 male swung to a knife and got stabbed in the chest
1 male gets a pickaxe to the forehead
1 male electrocuted through current
6 females and 3 males burned to death
1 male eaten by a helldeer
2 boys had their heads blown off by exploding presents
1 male impaled to the wall with a hemorrah
1 male tazed to death by the groin
1 male seen strangled
1 male seen with his head blown off with an exploding present
1 male seen stabbed with what appears to be a candle
1 male seen pinned to the wall
1 male neck broken by scarf
1 male hit in the head with shovel
1 female had her neck broken
2 females and 1 male seen murdered
1 male runover by helldeer, head crushed underneath killer's foot
1 male lands and impaled to a flagpole.
Total: 39
Posted by Kaijinu at 7:02 PM