Short On Plot, Heavy On Randomness: The Gruesome Twosome (1967) 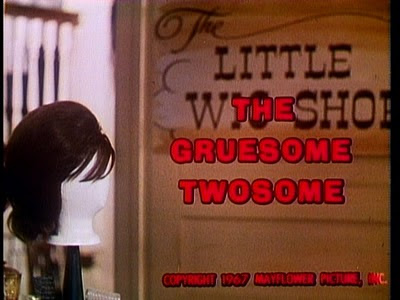 Elderly matron Mrs. Pringle and her retarded son Rodney scalp young coeds who drop by in their wig store to harvest their hair and make more wigs out of them. When her friends begins to thin out, Kathy, a concerned student, starts snooping around much to the patience of her boyfriend, tracing the disappearances to the The Pringle's wig store, discovering what lies behind it.
And that's pretty much the whole story. Yeah, all play and no work makes The Gruesome Twosome a weak and bizzare proto-slasher and while I know this is made from the decades wherein splatter matters in drive-in films, classics like TWO THOUSAND MANIACS! would at least have some bits of core in its gore.

This film lacks focus, filling itself up with a lot of scenes that doesn't really had anything to do with the plot, like some dude and his girl in a date with the gorging down potato chips and drown himself with wine, or that demolition derby that run around for nearly 10 minutes, just to name a few. The only good thing about this film is that the splatter at least got the ball rolling as whenever Rodney kills, he does it with so much clumsiness and lumbering buffoonery that his kills are messy, even for our standards today! (Not to mention Rodney's little quarrel with his last victim. Let's just say he had to keep an eye on her...)
Fans of drive-in splatter will definitely love this, heck, the rest of the world might as well for all I care, but it's gonna take more than three murders and a 7 minute clip of two sentient wig store mannequin heads talking to each other about the wigs being placed in their heads (and to add the weirdness of this, one of them DIES!) to keep me entertained and satisfied.
If you're looking for randomness, cheesy gore and a horror flick with no depths, you've found it, everybody else, move along.

Bodycount:
1 female talking mannequin head gets a knife on the top of her head
1 female scalped with kitchen knife
1 female beheaded with electric knife
1 female gets hacked open with machete
total: 4
Posted by Kaijinu at 10:44 AM