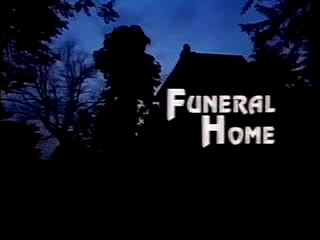 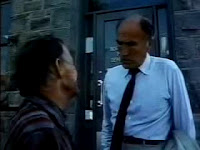 When Heather was asked to help her grandmother turn her missing grandfather's funeral home into a bed-and-breakfast motel one Summer, she never expected to know about her grandpa's questionable reputation as "Chalmers The Embalmer", a crazy old coot and an adulterous lover. And as much as she doesn't want to believe any of this, those angry voices coming from the cellar and the fact that many of their guests and/or by-passers start disappearing tell her otherwise. Could Chalmers the Embalmer finally living up to his nickname and killing off people? Or is there something else sinister afoot? 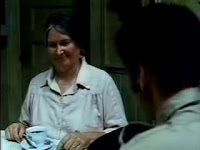 Not much I can say for this little number apart that it is cheesier than a fondue-drenched cheddar sandwich and too slow for its own good, all the while sporting a workable mystery.
Unlike many slashers being released in its era, Funeral Home attempts to mix a good whodunit with the hammy delight of odd characters, a somewhat strange combination that didn't work out too well for me. The likes of a bumbling law enforcers, a mentally-challenged gardeners, religiously-unhinged parental figures, and the obviously virginal good girl next door did give the film's story-driven mystery enough red herrings to distract us with, they do, however, come in too distracting for me to the point that I hardly cared who is killing these people. Add the fact that we spend a good portion of the first hour looking into these character's unusual personalities with barely anything of interest happening, the slow burn direction is relatively confusing and frustrating. 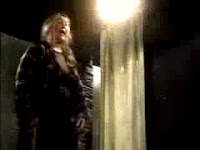 Things did finally pick up at the last third when the murderer starts to snuff off anyone suspicious; unfortunately, much of my interest was gone at that point and the relatively tame murders didn't help reignite my attention. The editing done to these scenes were creepy at most, putting some fairly good use of shadows and creepy noises to make the suspense work, but in the end, these scenes are no more than a lukewarm reward for our patience when the big reveal turned out to be fairly obvious, if not overly cliched.

It's sad really, but if they at least made more effort on pacing their story, or did a better job at characterization, Funeral Home would have been better. Yet I do recommend fans of atmospheric slashers would try to check this title if they can find it. I'm sure five out of ten from them would like it. Me? I prefer my moody thrillers with more intelligent themes or a brighter splash of red, thank you. 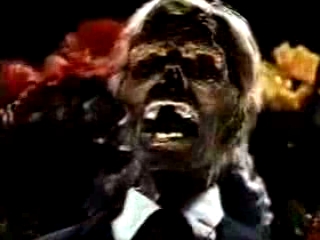 Bodycount:
1 male and 1 female pushed off a cliff in their car and drowns in a lake
1 male bludgeoned to death with shovel
1 male repeatedly stabbed with embalming needle
1 elderly male corpse found
1 female mentioned missing.
Total:6
Posted by Kaijinu at 1:57 PM