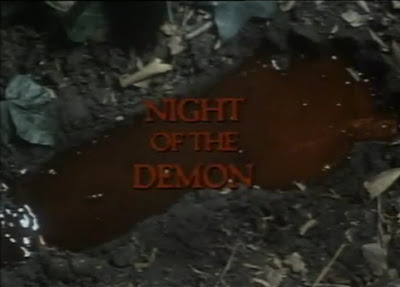 Back in 1982, United Kingdom released a list called Video Nasties which tallied up titles they deemed atrocious enough to be morally upsetting. Little do they know, they are doing us a favor as the list can be seen as either a round up of cult classics deserving to be seen like The Evil Dead (1981) and Anthropophagus (1980), or a warning label for movies that shouldn't be seen not because they're stomach churning, but how lazy and dumb they were as horror movies.

Among these titles is an odd entry of a slasher movie, one that takes backwoods hack-a-thon back to the beastlier side.

Despite the title, Night of The Demon has nothing to do with the supernatural and it is instead about Bigfoot, the hairy big ape superstar of the cryptid community. In this film, we get a group of Anthropology students and their professor going on a trip to the backwoods after watching a video evidence of Bigfoot attacking and killing a family. While investigating the place and searching for more clues to prove Bigfoot's existence, they are treated with grisly accounts of the creature's attacks, witness a cult worshiping the big guy as a god of sorts (!), get tangled with a traumatized lady's past, and attacked by Bigfoot himself...who looks like Hector Jimenez from Nacho Libre with more hair.

Obviously not the best slasher film out there, nor the best film of any genre to be frank, as the production value did little to hide its cheapness and the acting resembles some kinders rehearsing for a school play. Monotonous, weirdly executed and all.

Thankfully, however, what keeps this movie from being banished into my "bottomless bottom of shame" is the fact that it is so bad  that it's borderline hilarious and, as a slasher, it did try to best itself in delivering the overkills of all overkills. True enough, the murders here in Night of The Demon are done away through any means possible to keep themselves interesting such as close-ups, over the top gore, and some obscure ideas. Remember the sleeping bag kill Jason Voorhees did in Friday the 13th Part 7 ? Well, Bigfoot did it first with some slight variations.

The monster himself isn't really that bad either, though I was expecting something a little less "obvious". I guess I should be considerate seeing the low budget and all, but making Bigfoot look like a guy with fake teeth, some prosthetic brows, and some hair plastered all over his face doesn't really spell terror. Still, he does succeed on being scary at times; the brutality of the murders and its persistence in ridding all that stands in its way pretty much say that this creature is nothing of a gentle giant, which makes the finale of this film as distressing as it is a bit cheesy.

And while we're not blabbering about Bigfoot, the side story of Crazy Wanda and her religious nut of a father abusing her do managed to keep things watchable for a while: it's a sad, albeit campy at times sub-plot that might be this film's other strong point as it has a more focused story than the whole movie itself.  It's kinda clever actually; what we thought was just another red herring would later lead to our group's ultimate demise in the movie's infamous "cabin of violence" finale.

It's not everybody's film, I can tell you that, but it's worth a look. One fine no-brainer slice of cheese indeed, more fun to watch when you're drinking shots every time a cast says Bigfoot!