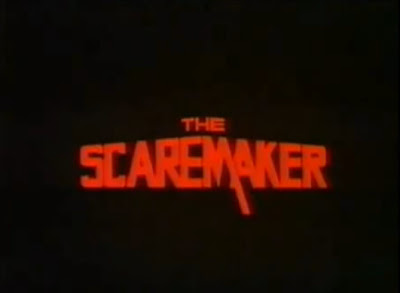 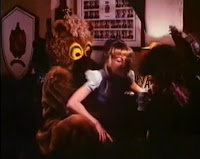 It was a winning basketball game for Dewitt University and this Ohio-based campus celebrates their victory with costume parties and the ever popular sex after the big game. But for this year, things aren't going out quite right; with break-ups and cheating happening left and right around the members of the basketball team and their respective girlfriends, its no surprise some of these boys and girls will be upset. But how mad exactly will they go?

As an annual campus tradition, there's a late night cheerleader scavenger hunt that happens every after the games and somebody donning the college's mascot suit, rigged with knives, began offing the girls. But who could it be? A vengeful ex? The school weirdo? A betrayed lover? A random psycho? Or was it Dicky Kavanaugh, the deranged former student who was institutionalized at a nearby loony bin?

Who it is, the movie played well in hiding its suspects and this is one of the few things I came to enjoy about The Scaremaker, AKA Girls Nite Out. While the movie did took its time to get the slasher antics going and there was some bit of cheese in the way, this gave way for us to get the major characters better who may or may not end up as a red herring at the end. With most of them guilty of temper, unfaithfulness and some suspicious background, it really could have been anyone.

Unfortunately, as good as this build up was, the bodycount starts with the scavenger hunt and it went kinda rocky; while showcasing some classic creep scenes like obscenely weird phone calls from the killer and some workable tension, the kills were oversimplified and the killer's disguise of choice was very distracting even if it was an effective way to wander around the campus without being suspicious. I guess a bear suit with googly eyes isn't as imposing as, let's say a guy in a hockey mask, but hey, could be just me.
Apart from that, The Scaremaker also did the strangest direction I've seen in a slasher film; interestingly, instead of going through your standard killer-chases-girl routine, it decided to cop out and give us a finale that resembled a crime thriller with all the suspects being interrogated and one cop managing to put all the pieces together. It all lead to a twist reveal that I admit didn't saw coming, but felt a bit random at most. not the most exciting route but I'll give it credit for trying something different.

Still, The Scaremaker made it work at a level but not enough to be that effective to be all that memorable for me. I guess I understand where its cult following came from and I would say the least that I respect their enthusiasm for this movie. Not overly great but cheese factor was there so fans of the hammy! Here's another one for your collection!