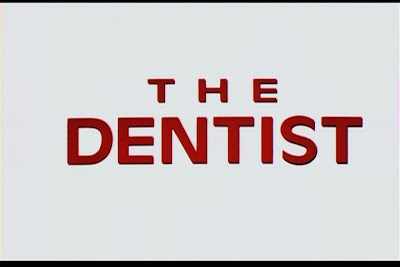 I was never afraid of dentists.

I'm not lying, I find those needles to be quite stingy but ticklish, and those drills soothing in my mouth. By the time it's over, I feel like a million bucks better with those pearly whites clean or my caps filled.

Of course, there were those times when I've felt the uncertainty of leaving my whole mouth open for a man to operate on. What if he's not qualified to do this, nor does he really care for his profession? Or worse, what if he's insane beneath that smile?

Dr. Alan Feinstone is a rich and successful dentist living in Beverly Hills. He has a beautiful wife, a wonderful mansion, a penchant for opera music, and a perfectionist.

Maybe too much of a perfectionist; he expects it from everybody including his wife, his staffs and even his patients. His search for perfection is putting a dent to his sanity as well as his job, but things begins to go out of hand once he found out his wife was cheating on him with a pool boy.

After a day of pressure, horrific visions, and threats, he snaps. He begins to coldly calculate on "fixing" every problem he can find with his life (starting with his wife), and finish it off with anything he can find, whether it's a kitchen knife, a gun, or even a set of dentist drills...

Brian Yuzna (Producer and director of cult classics such as "Castle Freak (1995)" and the Reanimator series) taps within a childhood fear and mixed it with a surprisingly good story, about a medical man's descent into madness and a narrative of the day it went all to hell. What was supposed to be a simple, "Time-bomb" horror flick, The Dentist brought forth some great tension and shocks in favor of cheese and dumbfounded plot. It slowly builds up to our expectations of a spree killing and when it happens, it didn't gave up on the gory goodness.

We get to see it all through Feinstone's perspective, which makes The Dentist more of a special take on the slasher genre, with our killer is our main subject rather than the victims. The fact that there's barely any background on how or why Feinstone became this unhinged made the character more unnerving and intense. Corbin Bernsen making a fine performance as our deadly dentist, showing a rather calm, calculated and hygenic killer that murders with style and procession, making his character likable and somewhat unique.
The only drawbacks this film suffers from were some dragging scenes and a few failed black humor. Pace is even, but there just some part that I felt a little unnecessary. Thankfully, the flow of the story managed to cover it up and linked it nicely to the murder spree later on.

It's has cult standards written all over it, and its popularity within the fans of grue earned it a sequel received with mixed feelings. Nevertheless, while I consider this a tamer effort by the man who brought gallons and gallons of fake blood in all of those Reanimator movies, The Dentist is a good rental for those who loves a little body horror with their slasher films.

Bodycount:
1 male shot in the mouth (dream)
1 dog shot on the head
1 male neck slashed with knife
1 female strangled with stockings
1 female syringe full of air to her neck, killed via air bubble to the brain.
total: 5
Posted by Kaijinu at 11:42 AM