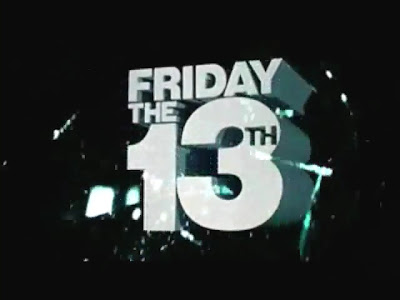 Well, here I go, my first review…in a blog…to be shown…in public. God help me.

For every successful franchise is always a beginning; Indiana Jones have “Raiders of The Lost Arc”, Godzilla have, well, Godzilla (1960), but what makes The whole plethora of Friday the 13th movies so different from these is that the first movie didn’t even bother to have the same killer as the rest of the franchise did.

Okay, all self-respecting F13th fans would know what I’m talking about, but for those who doesn't, let ole Pappy bring you all the way back to the 80s. (And slap your head repeatedly while we’re at it. Shame on you! SHAME FOR NOT KNOWING WHAT I’M TALKING ABOUT!)

Summer of 58, after a night of jamboree and kum-ba-yahs, two camp counselors decided to do more than just singing campfire song songs. After every good lil' boys and girls are tucked in, the two make-out at the cabin's attic. Only, they weren't alone that night, and not too long some one startles the two and buries a knife on the good lad's gut, down in the count as the girl tries in frenzy to fend away her attacker, only she bites the big one instead as the killer looms closer...

In 1979, young Annie hitches a ride from a local diner to the camp, now re(-re-re-re-)opened by Steve Christy; despite Crazy Ralph, a local doom-sayer, rambling that the camp had a death curse, and friendly truck driver, Enos, who gave her a ride telling her that the camp is jinxed, Annie drop off half way from the camp, but only to be picked up by a driver. Good luck turns bad when the driver refuses to talk and let her go, Annie jumps out and the killer gave chase. Not for long, the maniac catches up on her and slices her neck open.

All the while, the camp continues its renovation as the new, young, and enthusiastic counselors began fixing the place, while Mr. Christy leaves for town to gather some supplies. The counselors had their share of fun, swimming in the lake, having lunch (hopefully not that snake they just killed...). Crazy Ralph even dropped by to greet them "You're all doom!" before taking the ride back home in his bike. As a storm rolls in, the counselors took shelter, some in the cabin, some in the bunkhouse.

The two lovers in the bunkhouse decides to grab opportunity by the gnarls and do each other, unaware that one of their friends lay bleeding from his neck cut above the top bunk. After finishing their bedroom business, ole Kevin Bacon decides to smoke a fag, only to get an early demise by an arrow to the throat. His girl goes next when the killer buries an axe into her face. All this went unnoticed by the three in the cabin, who are busy playing "strip-monopoly".

Christy gets an escort back to the cabin when his car breaks down in the middle on the rain, upon arrival, he gets a bright light flashed to his face and a knife stabbings to his gut and chest. The counselors stops their game for a moment when one of them hears a cry for help. She left and never came back, the two went on to investigate the weird noises, the cut phone lines and the bloody axe on the bed. They split up and ole Alice is left alone by herself. When her friends fails to return, she heads out by herself and looks for them, only to find some of her friends dead or dying. Frantic, she's about to run out of the camp when, Ole Mrs. Voorhees came and calms her down.

First calm, Mrs. Voorhees looks around and spots the body; she began telling Alice of her son, who'd drown years ago when the counselors failed to pay attention to him. Alice snaps out of her hysteria and ran out to defend herself from Mrs. Voorhees, now insane and the one who'd killed everyone to avenge her son's death.

After a struggle against the crone, Alice knocks her own with a frying pan before lumbering her way away from the camp, but Mrs. Voorhees is far from dead, and attacks her once more at the lake shore. There, Annie managed to knock off the killer's machete and uses it to decapitate her. As death rattle flails her arms, Alice climbs in a canoe and floats away.

That morning, the cops arrived to help her, but a zombified corpse of Jason, as a boy, leaps out of the water and pulls her in.Whether this really happened or not is never fully explained, as she later finds herself in a hospital, being interrogated by police. When she mentioned about the boy, Jason, the cops were baffled and tells her that they didn't find any boy.

Thus, "... he's still there..."
The Friday the 13th movies are considered by many as the grand name helmed in slasherdom; I love these movies to death, and I really love the hulking killer who dons a 1970s Hockey Mask with the red war paint named Jason Voorhees. But with ole big boy absent here, what we have here instead is good ole Mama Voorhees donning the machete, and slashing the kiddies to ribbons for our entertainment. The rest of the movies pretty much owes Pamela Voorhees a lot if she didn't started it all and made herself one of the most iconic female slashers in history.

This being said, Pamela Voorhees herself (wonderfully played by Betsy Palmer) is no pushover; she’s the mean mom nobody would ever have, willing to kill off those who’d caused her son’s untimely “demise”, “hear voices”, packs a teeth of pure grit. She’s the whole cake that celebrates a revolution for the hagsploitation genre back in the 50s/60s.

What makes this movie so enjoyable is the fact that it’s perfect…well, perfect in a sense that it is the primary example of a backwoods slasher done right. From isolated locations almost devoid of any help and authorities, red herrings, stereotyped characters and, of course, a high and gory body count. Yes, for a franchise that reaches 300 deaths or so, this one takes the easy (and partially tame) step to stardom.

Aside from that, This also marks the starting point of one of cinema’s most successful horror franchise (among others, of course) which, I have to admit, has its on and off entries, various amount of cheese, and various amount of (heavy) body count.

Director Sean S. Cunningham and Writer Victor Miller may had not been sure on how big their little movie would have become, but judging from the fans this movie still have from then til today, it definitely earned its gory glory (Though, Sean did managed to produce a couple of good horror comedy flicks, such as House (1986), and "My Boyfriend's Back"(1993), though, I've yet to see the latter...); but would it's sequel do better? Well...

Bodycount:
1 male knifed to the gut
1 female killed (offscreen)
1 female neck slashed with hunting knife
1 male found with neck slit
1 male gets an arrow driven through his neck from under the bed
1 female had face split with hatchet
1 male stabbed on the gut and neck with knife
1 male found pinned to the door via shot arrows
1 female thrown through a window, seen dying
1 female decapitated with machete.
Total: 10