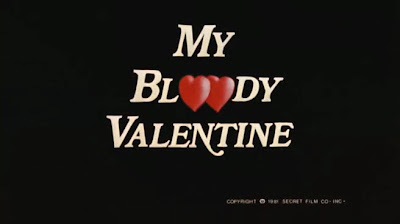 What made My Bloody Valentine earn the highest rating I can give to a movie? (yeah, "Golden Title" reviews what I considered the best of the best). Nothing. Just Nothing. It's just that the movie itself is the slasher genre immortalized and defined.
Beginning with two miners venturing deep into a cave, one of them began to undress and reveals a voluptuous woman underneath the suit. The other miner, began caressing her milk mounds as the girl teasingly etches his gas mask. For a moment, the two would had come to an early on-screen love play until the Miner sees a heart tattooed on her breast, his hands shivers from a sudden anxiety and pushes the girl to a pickaxe, impaling her by the chest...

The Legend of Harry Warden, a miner who is said to return to the town every time "the 14th draws near", driven insane after a cave-in caused by some ignorant workers,  had plagued the town of Valentine Bluffs for far too long, so after a twenty year hiatus of holding any Valentine parties, the town finally decided to loosen up and hold their first Valentine party since the incident. Paper hearts are posted in every houses, pink streamers around the town, the people are finally free to breath again, but after a beating red flesh was found inside a candy box, local authorities decides to hold the parties after a string of familiar murders began popping up. But feeling hauled up themselves, the young 20s to 30 somethings decided to hold a party on their own, near Hanniger Mines, which is miles away from the town. Unknown to them, the legend is real, and hes out there waiting with his pickaxe in hand...

In the meantime, two miners, Axel and T.J., struggles to win the heart of their love interest, Sarah. The two young adults constantly grapples and provokes one another to outdo each other, but when the murders starts piling up on their party and Sarah, accompanied by her friends, was left in the mines, the two had to settle their issues aside to save the girl they love and everybody else.

But is there more to this story? Has harry warden really came back? Or has someone gone insane and decided to live on Warden's legacy?

Many slasher fans liked this movie by the fact that it's by the book. If there's going to be a perfect slasher film to show as an example to a newbie fanatic, this would be it. It's got everything from the moody atmosphere, a claustrophobic finale, a well played holiday theme (complete with a love-triangle side story), a cast of likable (and well acted) characters, a crazy doom-sayer, the virginial final girl (and boy), some nice red slayings, and a killer that's iconic as a cult favorite.

Director George Mihalka injects a fair amount of suspense, and some slick stylishness. Even if you are watching the (MPAA responsible) heavily edited theatrical cut, the film works even without the aid of heavy special effects, which is a testament to the overall quality of the film. The gloomy and claustrophobic setting, an emptied mine thanks to a celebrated Valentine party, gives the film an effectivly realistic look and aura, which helps the authenticity of the film's reputation as a "scary" or 'thrilling" slasher. The fact that the usual suspects of clichés are present; cheesy lines and a seemingly familiar plot that resembles  nearly every slasher film made (bad past coming back to bite unsuspecting victim's arses, the usual gameplay), it doesn't really help add anything new to the film. But comparing with it with most independent titles that didn't get the same franchising treatment as the big shots of horror (Jason, Micheal Myers, Freddy), "My Bloody Valentine" holds it's own. It's one of the few films from the much enjoyably infamous 80s era, where all things gone psycho-killer and cheesy, holding up to today's standards as pure entertainment. It's simplistic, yet relates, evidently with the killer's choice of victims; while many similar titles out there spent their time stalking you nubile teenagers, My Bloody Valentine tried targeting the working class, those people who're fresh out of college and too young to settle down. Thanks to these "kids" the film is rarely boring, full of attitude and life, and provides one of the cheesiest love-triangle there is to be put on screen!

The film's killer, a legend came to life known as Harry Warden, may not be as big as Jason, or Freddy or Micheal, but Warden was an interesting fella. He represents chaos, a pure animal driven by hate, caused by the human ignorance that left him for dead. He's a perfect cinema monster that walks in the shadows, clad in black mining gear and gas mask, following the footstep of so many more that came before him. Though he didn't had the same creep factor as The Shape or the wise-ass attitude of Freddy, Warden still made an impact as an overtly easy, yet effective killer thanks to some clever camera work (and the extensive use of shadows). In other words, he's pure badassery.

It's a big MUST for all seekers of bodycount films to check this one out. Words cannot explain its beauty. But a word of the wise: If you want to see the 2009 3D remake of this film, try this first. Or if not, better check this one out, too cuz, for a slasher fan not to know My Bloody Valentine is like a Christian not knowing who Jesus is.