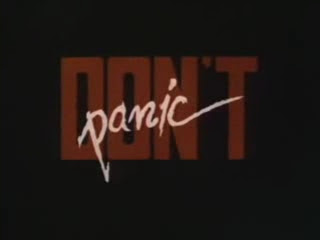 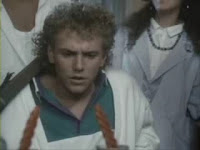 It is Micheal's 17th birthday and his buddies decide to celebrate it by having a mock seance with an Ouija board and coke cans with candles, in an attempt to make it memorable since he will be moving to New York in a couple of days. Why and how exactly is dabbling with the dark arts a great birthday surprise for just anybody remains a mystery to me but in typical horror movie fashion, the session awakened something evil and murderous, which apparently needs some time to build up to since we don't get anything horrifying for the first half.

Instead, we see this weird love story angle where Michael meets a new girl, Alexandra, and the two hit it off rather cheesy, complete with a walk in the park montage, styrofoam sombreros, and giant corndogs. 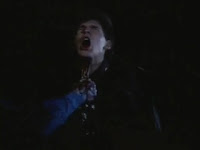 Before they get any sappy with this romantic angle however (and fortunately), Micheal starts seeing ghastly things such as daggers going through young nubile flesh, blood in the sink, and the usual "bloody-hand-coming-out-of-something" gag. His mum thinks it's just nerves from the upcoming move, while everybody else thinks he is going nuts. He might as well be, until faces start stretching out of TVs warning him of an evil spirit named Virgil taking over the body of one of his buddies, starting a bloody killing spree. At that point, it's nothing but your usual supernatural hack'n slash!

Don't Panic is the Mexican Equivalent of the popular slasher A Nightmare on Elm Street (1984) only with more kills and an uninspired wise-crackin' killer named Virgil. (Of all the names to choose from.) 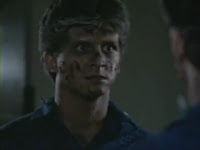 It's unintentionally funny thanks to a lot of cheesy scenes and outrageous acting from its casts, something that didn't help live up the slow direction that's supposed to build up Michael's romance with Alexandra. Due to this, the movie can be a drag for most people, with the only saving grace being that it is passionate with the red stuff. And true enough, we got vicious stabbings, neck slits and a good chin stabbing to provide viewing pleasure for slasher fans who are patient enough to sit through almost an hour of nothing.

If you're into gore, cheese, and main leads who are man enough to wear dinosaur PJs in his teen years, then take a good nice look to what this one has to offer. It's not perfect nor is it pretty, but it'll do you well, sicko!