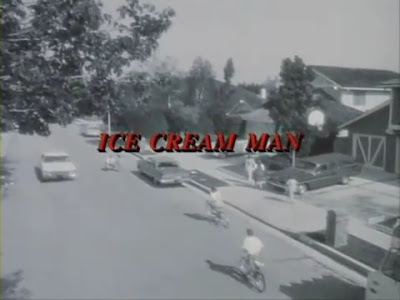 You remember Clint Howard? Bald guy, weird voice, creepy doll's eyes stare? For many years, he'd been on TV shows and movies (both big and small screen) for so long as minor characters, either as an extra or a comic relief. So, when he finally gets into a "horror" flick with him as a killer Ice cream man, what was my reaction? Something like a mix of satisfaction, remorse, skepticism and just downright ho-hum.
Yet, what draws me into watching it anyway is that I always catch the trailer of this movie back then when I was just a six-year old lad. As long as I could remember, I've been a horror fan since the day I was born; I recall watching the finale of "Halloween II" with my dad when I was five, watching Friday the 13th as a seven year old, and sits through House of 1000 Corpses when I was ten. So, as a result, I'm a slasher fan at heart and a horror lover at best. But this movie managed to escape my grip so many times when they shows it in cable television; so when I find a copy of it at the local store, I just had to see what was it I've been missing

Gregory is the Ice Cream Man, a former mental patient from Wishing Wells Institute, where "there are no sad days", sent there after seeing his childhood hero, a local icecream man as well, gunned down by some gangsters (or something).  However, Gregory is far from fine now; in fact, he's still a bit nutty, and not just because he hangs around with the pistachios. No, he kills off people he deems undeserving of the "joy" he's bringing them, like the local trashpicker who may or may not be a child molester, or that cheating husband and his girlfriend. But when one of the neighborhood boys disappear, it's up to the little boy's band of friends to find out what the ole' Ice Cream Man is up to.

Sounds promising? Well, not really. It's as good as it's gonna get.

I'll be frank, the movie is just horrible. It's tame for a slasher film, and there's a lot of things that doesn't make sense here. Like why did the first ice cream man got shot down in the beginning? Or why and how did Wishing Wells Institute went down into the rotting decayed hell house it is now? For a sub-genre known for exploiting every possible white collar application there is, the idea of a serial killing ice cream man is just too obscure, if not original, to just lag off easily unless they producers know how to play their cards right.
There's a few attention grabbing sub-stories, such as the one concerning Gregory and a little boy he kidnapped, called "Small Paul", where the deranged vendor tries to turn Paul into his heir or something, teaching him the pros of being a serial killing ice cream man(and strangely enough, Paul developed some sort of Stockholm syndrome with his captor), but other than that, Ice Cream Man's very confused very weak with the shocks and scares. I mean, this is about a killer who's always surrounded by children! It would have been a better movie if it had braved itself to do a gutsy topic as child murder or something, and even if they don't wanna go on touchy matters, they could at least hyped up the gore. A slasher's nothing without the sticky red!
To sum it up, this is a weird, cheap title. It has many to offer, yet it kept limiting itself into something befitting a TV flick. Not worth much, but if you're looking for some time to kill, try renting it. Least it'll take your mind off things...
Bodycount:
1 male machine-gunned
1 dog chopped to bits
1 male seen stabbed to death
1 male had his face burnt with waffle iron, beheaded
1 female hacked with hook
1 male killed offscreen, clothes seen
1 female gets an ice pick stabbed underneath her jaw
2 males seen beheaded
1 male sliced to bits by bladed ice cream mixer
Total: 10
Posted by Kaijinu at 8:15 PM