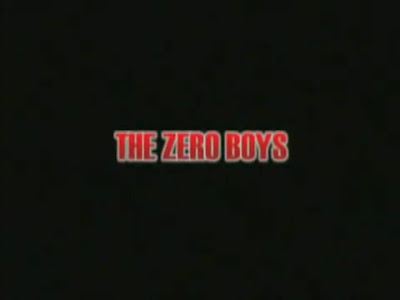 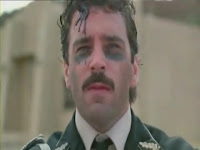 Starting a movie in a barren town where a band of weird looking guys in costumes stalking and shooting each other is definitely an odd way to begin a plot. Especially if you throw in a picture of Rambo just for reasons.

As the last guy gets shot, everything is revealed to be no more than a game of paintball where it's every other paintball team versus The Zero Boys, a trio of close buddies on a winning streak. As their trophy, they claim one of the girls from the other teams (Kelli Maroney from that killer-robot slasher Chopping Mall (1986), promising her a good time with them as they head towards some hills for some well-deserved relaxation. 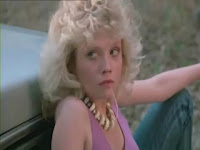 There, they have the luck of finding an abandoned cabin that they can spend the night in, but as these kids do their business of being teenagers, glimpses of a terrified woman running, peeping toms spotted, mass graves and a barn-turned-torture chamber (with additional snuff film playing) eventually tell them that this isn't the dream weekend they're hoping for and the deranged house owners want them to stay. Forever. 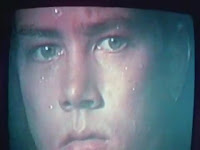 The Zero Boys starts out good with teens being teens and some cheap scares littered in places, but it spends so much time building up the tension that it lost track of time and the killers' main appearance and spree were squeezed only into the last 25 minutes. This normally isn't a big problem as many slashers do this to build around the story or casts, but the fact that the victims here are just too smart (Three to four of the casts are supposed to be trained survivalists), the movie should at least gave these characters a smarter set of villains to work through. This leads to a very high survival count and a plot that feels like it never even started, leading to a bodycount mostly consisting of random victims found dead.

It was 1986 and Director Nico Mastorakis, along with co-writer Fred Perr, tried to create a unique entry to the (then) dried-up slasher subgenre and probably hoped it'll hit it right. The build-up is good to say the least, the direction has great tension and tone, but with very little of these characters properly developed and with an ending so rushed, The Zero Boys left us hanging as a slasher and a survivalist flick. 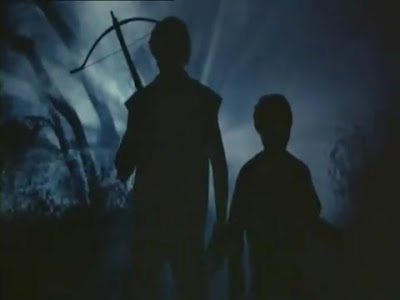 If you dig B-Action horrors, this film got lots of potential albeit unachieved. Perhaps a remake should be suggested for this.


Bodycount:
1 female murdered (method unknown), body later found inside a trunk
1 female head found in freezer
1 male shot through the back with arrow
1 male found hanged
1 male shot and falls into a spiked pit, later gunned down with automatic rifle
1 male electrocuted in a pond via stun gun, later gunned down with automatic rifle
Total: 6
Posted by Kaijinu at 5:51 PM