The scene involves a trio of college students looking for some T&A across Europe. After a little brush with the locals late at night, got what they wanted as a friendly Russian man informs them of one such place near Bratislava, where girls are always looking for sweet American asses. Of course, the boys got what they are looking for the moment they arrive, but what they didn't expect is to be targeted by an underground organization working a "murder-for-profit" ring.
For me, just because a slasher film went off the pattern of stalking dumb teenagers in an isolated cabin with power tools one by one, it doesn't make them any less than one. This being said, Hostel (2005) has a lot going on to make it your standard dead teen flick; the plot has this hidden conspiracy vibe going, focusing more the mystery happening behind the saunas and raves, letting go of slasher staples such as chase, stalkings and a basic killer, as well as having a bigger emphasis on the "Final Boy's" escape in the end.
Of course, to keep the horror elements as present as ever, this Eli Roth directed feature made itself for pure gorehounds as mutilations go heavy the more the story develops, with the first kill starting out pretty tame (an off-screen beheading) before going to an all-out splat attack on the audience with an assortments of murders such as castration, electrocution, disembowelment, you name it. No one saw it coming and it was enough to keep its fans happy.

As I see it, Hostel (2005) is more as a revival of Herschell Gordon Lewis's splatter films that started in the 60s with more visceral details than before, as well as paying a few nods to past slasher films. (like that obvious tribute to Leatherface's little "accident" in the first Texas Chainsaw Massacre back at 1974 and the usual teens in peril of masked psycho/es plot line) Interestingly, some of the disrepute this film have didn't come from the gore alone, but also the interpretation of a European country as a war plagued, crime high and smut infested land where abducting vacationers and selling them to willing buyers to murder is their only way to mostly relieve themselves from these problems.
I genuinely like to see Hostel (2005) as a bonafide splatter film where you just sit back and enjoy the carnage without thinking too much. It's shallow, yes, but I'm a gorehound at heart. If I wanted more of a story coming from a Torture Porn flick, I would see its sequel instead (which is a lot better, surprisingly!) or even the beautifully tragic 7 Days (2010) (AKA Les 7 jours du talion), but as for this, I'm simply cool with it.

(Note: in some version of  the film, the final kill didn't happen. Paxton, after escaping and about to board a train, spots the Dutch Business man with his daughter. He follows them to the bathrooms where, while the Business man did his...business, he kidnapped the daughter. Once the Dutch businessman notices her absence, he begins calling out for her, panicking as the film ends with Paxton, with coldness in his eyes, leaves with his hands muffling the girl quiet.
On a personal note, I really prefer this ending!) 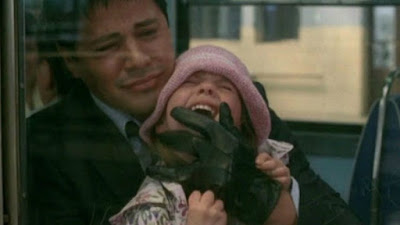