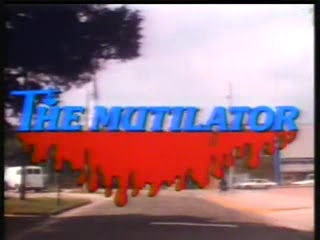 A long time ago, a young lad accidentally shot his own mum while cleaning one of his father's rifles, a supposed kind gesture as that day was the man's birthday. Needless to say, when his father came home and saw the mess, he lost it and vows to murder off his own son a few decades later...

Now as a teenager, the boy, named Ed, and his friends decided to help out his dad close up their summer house, seeing this also as an opportunity to simply party hard. Unknown to them, however, Dad's fallen asleep underneath a secret compartment of the holiday home and is still pissed off by the accidental death of his spouse; so when Ed and his friends arrived at the house to have a good time, the killer in him has finally awakened and began to pick them all off. By Sword. By Pick. By Axe.
Zero Budget. Zero production value. Zero-grade casts, surely enough the late 80s was the downfall of the slasher genre. It was a real struggle to keep this genre fresh but The Mutilator just proved itself as a tired piece of work that barely packed any scares, suspense and the credibility on its actor's ability to pretend dying. (or convince us with their acting for that matter...)

However, for the right people, one saving factor that gave this film worth was the gore; the film is made to be loved by gorehounds as it notoriously tirade each victims with the splashiest kills like hooks forced into groins, some beheadings, some implement, limbs here, limbs there and, my personal pick, a hand held boat propeller ala chainsaw, a death in slasher history to that almost knocked this film into horror-comedy territory. (Intentional or not is beyond my knowledge.) there's also an air of cheesiness from this movie that can be another winning factor among the few, but for those who prefers to have a brain cell or two from their slasher movie, this is definitely a long one to sit through.

Seeing all of this, The Mutilator had its shines and it's horrible flaws, but depending on who will be seeing this, it's hard not to see why it's deemed a cult classic. Bad Cheese and good gore is this film's forte, if you're up for anything that splashes the red stuff and that's all you care about in a slasher film like this then this is your go! If you're an open-armed feller that welcome the funny out of the cheese like me, then this is your go, too.