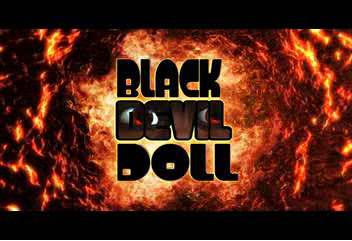 Mubia, an exiled black militant, gets sentenced to the fryer for murdering and raping a number of white women. Luckily for him, a buxom bimbo dabbles with an Ouija board at the night of his execution and this somehow results to him being reincarnated into the girl's ventriloquist dummy, thus turning into the Black Devil Doll. Frightened at first, the girl warms up to him (quickly) and they become a couple (in that second), with cheesy montages of them in the park, eating ice cream, riding a tricycle, having sex in the couch, all while the girl's ex-boyfriend tries to win her heart back. And I wonder, had it occur to this guy that his girl's doing a living dummy? Just one time, did that single misplaced idea occur to him?
...Gah, moving on.

Soon, the boob and doll's relationship goes stale and Mubia demands more moist, buxom TaTas for his pleasure...and surprisingly, his girl lets him have his way and invites her friends over to her house, not telling them about the living dummy with the insatiable libido. After she leaves them alone with her puppet boyfriend, who she assumes is just gonna have sex with them (uh-huh, and how is that gonna work with a living dummy?), Mubia starts attacking, raping and killing them one by one. Not necessarily in that order!

As you can tell, Black Devil Doll is not a film for everybody. It has every deviousness squeezed in a pint-sized puppet show that will surely upset a clean-cut soccer mom into organizing a hate group with tommyguns, but for those with a forgiving good sense of humor, and a bit of a "rock on" to these things, the film is a cult classic in the making.

As a slasher, it actually covers everything by the book; we got creative kills going in and out, ranging from brutal knife stabbings and throat cuts, to death by hair dryer electrocution and a random blow dart to the neck. Worse comes around the end with the longest, dramatic gun kill that I've seen in history.

Apart from the slasher influence, it's also a tribute to the early 70s/80s exploitation sub-genres, including blaxploitation (seeing majority of the cast, main "star" included, is African American), sexploitation (Must I elaborate? Maybe. We do have a full sex scene in one point, heads up to you guys) and even a bit of Rape and Revenge. (The finale)

Black Devil Doll is sure to be welcomed by fans of slasher flicks, blaxploitation, and exploitaion alike. It's a funny, smutty future cult film that's well made, fresh without trying too hard. Also, before you turn off yer DVD when the credits starts to roll, there's actually a special short played in between. I'm sure slasher fans will be happy about that one...