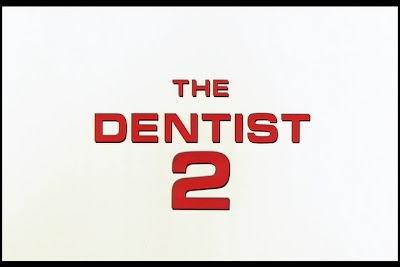 Following his escape from his captivity inside a mental ward, Dr. Alan Feinstone took on a new life as Dr. Cain in Paradise, Missouri. After murdering a local dentist (over a rushy-made tooth cap), he easily got his profession back, and tries his best to be normal and get his love life back on track with a neighbor he fallen for.

But with his muted wife, surviving her husband's attempt to murder her, wanted him tracked down and hires an investigator to find out where he had escaped to, and some people recognizing him from his previous murdering spree, perhaps being normal is a job worth dropping over a good old' fashion murder spree.

To be honest, it's just as good as the original, but now that we're aware what kind of horrible things our "hero" is capable of doing, there's very little surprise left for us. What we got treated with, instead, is another narrative involving our titular killer dentist trying to fit in a new town while attempting to repress his murderous nature. The way I see it, the plot's more mellow than the hate-filled first; there's a few dark humor inserted here and there, decent kills, some brutal dental torture, not to mention the tragic love angle reminiscent from films like Psycho 3 or Maniac Cop 3: Badge of Silence, making The Dentist 2 an unnecessary yet watchable movie.

So it lacks any surprises, and, rather, it stays on its course. It's not a bad film to follow a great first, but it has "franchise" written all over it, especially its weird ending, that left with a cliffhanger and wondering what would happen next.

So, if you're an avid fan of the first, there's a chance you might hate it, but other than that its a good film to spend a night with. Just don't watch it before your dental appointment tomorrow morning...

bodycount:
1 female missing (presumably killed)
1 male falls down the stairs and broke his neck
1 male anesthetic injected to his ear
1 male hammered to death
1 female dental tortured, later found dead with her lips cut off
1 female bludgeoned with wooden board on the head
total: 6
Posted by Kaijinu at 12:52 PM