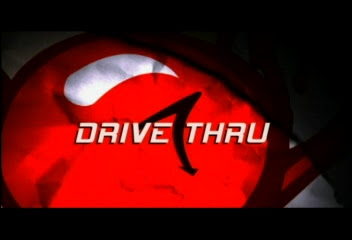 We then shift our attention to a backyard party that is later cut short when the cops show up when they became too rowdy. Not wanting to end the night early, our lead, Mac, along with her boyfriend, Fisher, decided to have fun inside by playing with an Ouija board with their friends. Strangely, while the board apparently worked, all it gave out was a series of jumbled letters and numbers; this later turned out to be  the plate number of the car owned by the opening victims.

Released by Lionsgate, Drive Thru is another Direct to Video effort that, while technically bad, it is somehow made a little bearable thanks to its angry, remorseless, and maniacal killer. The film itself is a plethora of cliches but works pretty well as a star vehicle for another wise-cracking killer with a whole lot of style.

The visual effects can be poor as you can obviously tell what's CGI/ CGI assisted or not and the acting varies from hilarious to wooden. And then there's the plot twist that was really A Nightmare on Elm Street(1984) rip-off with the killer's creation centered on a secret kept by the victim's parents, death by fire and vengeance inflicted upon the children of all those responsible. Unnecessary subplots were plenty and all left open for a possible sequel which felt overworked for nothing.
And yet, with the I'm willing to put those aside thanks to the film's energy and camp value, and too the series of blood-soaked killings that are as silly and/or gruesome as possible. There's a lot of heart and guts put into the direction and the corniness is just workable as a campy horror flick.

There's little else to say about this movie other than it can be a lot of fun. It's obviously not meant for everyone but anybody with an appreciation for bad movies can get a whole lot of entertainment from this. Drive Thru is worth the rent and a good viewing company with your greasy chicken nuggets and monster burgers.