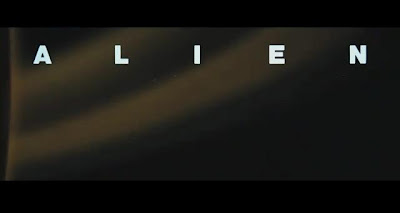 
In the midst of space, the seven crew of Nostromo, a commercial towing ship in a far distant future, receives a signal coming from a nearby planet. The crew had no choice but to answer it ("space laws" prohibit them from ignoring it), only to find a barren, storm-ridden land of a planet littered with weird eggs and the remains of a large creature.

Upon investigating, one of the crew members gets an alien baby attached to his face, a creature that renders him immobile as the rest of his companions tries to save him. Any attempt they made to pry off the creature proves to be unsuccessful as not only does the alien tightens its own grip whenever they force it off, but it also bleeds acid when they tried to cut it. Just as it seems this unfortunate victim will remain like this for the remainder of their trip home, the creature unexpectedly detaches itself and dies, bringing the man back to consciousness.

What should have been a good thing suddenly goes wrong. Horribly wrong; the alien had laid another creature into the man where it incubated and bursts out of his chest once it is strong enough. The hatchling scurries off before the doomed crew can react, unknown to them giving it time to fully mature. It's not too long before it goes on a hunting spree, killing off the ship's passengers one by one...

Alien should have been a sci-fi flick with it's space shuttle settings, but as the movie's emphasis was more on pure horror, the lines of science was almost blurred to gave way on all things tense, grueling and horrific.

If one would actually focus on the kind of story Alien have, then you could notice a lot of basic trappings commonly found in your standard horror/slasher movies, beginning with its location; it's a nice approach to a horror flick actually, as it gives the idea of space being as dangerous as being stuck in a lake house with a masked maniac, enough of a thought to actually cover the movie's lack of any strong plotting or character development. The large ship gives the monster much convenience in hiding, making the unique setting both a claustrophobic and frighteningly cut off from any form of help. This sense of being alone gradually worsens by the time everybody's up to their necks in danger and struggling to survive at any cost, even if it meant taking out their own.


The next notable horror element of Alien would be the creature itself; in a horror movie, the villain would always act as the running fuel of the story, may it be a creature from the beyond or a situation that no one was prepared for. The titular alien here is a combination of both; a force of nature that somehow found a way to smuggle itself to an unknowing set of victims, it's entire nature literally alien to them. Combining this fact with the creature's own pure instinct for killing makes the creature itself a terrifying menace. In a technical sense, the special effects team (headed by Brian Johnson and Nick Allder, who would later supervise the SFX of future films like Braveheart, Conan The Barbarian (1982) and even Hellboy) deserves a lot of credit for bringing this monster to life, wherein it menaced both the cast and the audience themselves with incredibly detailed grotesqueness and otherworldly strangeness.


While nearly absent of development, one part of Alien's success as a horror film is it's credible casting, note worthy of this was Ian Holm as the ship's physician and John Hurt as the victim of one of cinema's most recognizable death, both bringing much palpable role. Of course, among these two and the rest, we also have Sigourney Weaver filling in the "Final Girl" status, whose awareness of the dangers this creature will be bringing and would had saved them all if they just listened. In the end, it's just up to her to save herself (and the crew's local pet) from the alien's rampage, in vein of the classic tradition of  future slasher films that would later goes full scale in the 80s reign.

As dark and horrifying Alien would be, it really is a hack and slash film with sci-fi trappings. From it's built, plot and murders, indeed, in Space no one would hear you scream, even this tagline has the bodycount genre written all over it. It's sequels, however, moves into pure sci-fi territory, both in action and in horror, and even has a big crossover with the dread lock aliens in "Predator". If you don't agree with me, I'm cool with that, but for me, A hefty seven deaths is enough for me to list it as a slasher...