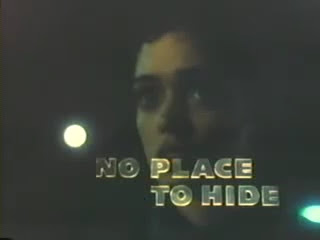 Amy is a 20-year old art student who was just driving home from work one night when a man in a balaclava and shades sneaks up behind her seat, eerily saying "Soon." She screeches to a stop and flags someone to help her against the intruder, only to find no one in the car.

Soon, a series of stalkings begin clouding over Amy's life; psychiatrists point it all to her subconscious playing tricks, a manifestation of the guilt she's experiencing over the death of her father years ago. Amy believes them and decides to visit the place where it all started - A lonely cabin in the woods near a lake - not knowing the man in black might be around for real.

No Place To Hide plays nicely as a TV thriller wherein it is divided into two parts; the first concentrates on Amy being stalked and chased by the black hooded boogeyman, playing around the idea that she might be seeing it all in her head. By the time she reaches her cabin and something unfortunate happened, the film takes a complete turn and focuses on the guilty ones as they seemingly start getting stalked themselves.
At times, the film borrows slasher elements, most prominently the stalk sequences that hail heavily from the other slasher trappings made that year. Other than that, the film is more likely an American-style giallo of sorts, tapping the idea of paranoia and guilt in both halves as it plays an important part on keeping the film's mysteries well hidden.

Nevertheless, it's not the best thriller I've seen but No Place To Hide is a modest entry in a year full of chainsaw mutilations and masked psychos in love with their machetes. It plays the whole game safe (maybe too safe judging from this film's low bodycount) and it is that element that made me appreciate it more. Paranoia never looked so good on TV.