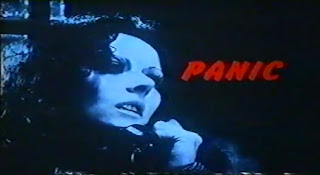 There are actually plenty of short films out there that pays good tribute to the heydays of bodycount films, some of them doing quite mighty fine in terms of quality and story despite their short running time. One good example would be Panic (1978), a short film retelling of a classic old urban legend about a lonely hitchhiker at the night who may not be as harmless as they seem.

A bicker between two young lovers ends up with the girl, a model, storming out in an conveniently stormy night. Along the way, she sees a woman standing in a bus stop hitching for a ride and feeling chivalrous for the moment, decides to help her out with a lift. This good deed unfortunately leads to something off-putting when the girl starts to notice the lady's rather odd behavior and creepy glare; feeling she woman may had overcome her stay, she tricked her into stepping out of the car and phones her boyfriend of what just happened. In an act of woe, the boy plans to pick her up and agreed to meet her at a nearby police station.

All the while, the girl noticed the woman forgot her purse and hands it to the police upon her arrival. What they found inside may spell something deadly as the boy, on his way to the station, meets the woman (now walking and carrying a new purse for some odd continuity reasons) and gives her a ride...

They story is quite simple, really. What gave it more of a push was the story's moody atmosphere and tension as the story progresses to the girl's encounter with the hitchhiker. There's very little blood and the only killing that occurred happen off screen, but it was for the greater good as the film's eerie touch is enough to give a good scare. Worth a catch if you ever have the opportunity to see it.

Bodycount:
1 male killed with cleaver offscreen
Total: 1
Posted by Kaijinu at 9:41 AM