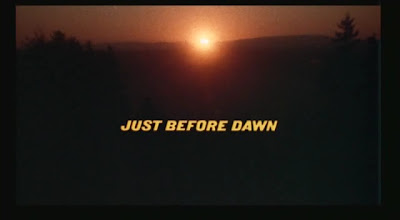 Two hunters find themselves entering the remains of an abandoned church in the woods when they are suddenly terrorized by an unseen hulk. One hunter got away, the other got something in between his legs that's long, hard...and razor sharp.

﻿﻿Cut-shift to a van full of campers on a hiking trip of fun who were warned by the local sheriff and too the surviving hunter that the woods aren't safe. As any dumb teenagers would in this kind of films, they ignored  all these warning and continue to hike deeper into the mountains, which they eventually have to go on foot when the trail got too thin for their van. Camps are later set and the usual teen business begins (loud music, making out, small talk, everything else that has nothing to do with hiking);they soon ran afoul with a family of hillbillies who're less than welcoming towards city-folks and proves that point by blowing up their some of their gear with a shotgun.
﻿﻿
Stubbornly, a radio full of buckshots wasn't enough of a message to drive this kids back home, so they still went on their trail. However, our demons (a pair of hillbilly's mongoloids) finally decided to make their move and began killing off anyone they get their sausage fingers on. As the group thins down to the last two, the battle for survival starts...

Just Before Dawn is indeed an underrated gem; high hopes were set thanks to this film's unusually messed up opening kill, placing us in a mind set that we will see more blood and dismembered body parts rather than peeps talking and freaks plainly stalking, but instead we sadly had to sit through a sluggish pacing in order to build tension, even once it finally got around the climax.

Still, moving away from this flaw on momentum, the film did managed to recreate one of the best suspenseful and moody atmosphere in slasher flick history, mimicking the 70s portrayal of mountain men and demoralizing survivors after undergoing some serious threats and drastic measures to survive, often in vein of "Deliverance (1972)", or the "hicksploitation" sub-genre in general. The movie's eerie, sullen and isolated backdrop helped create some tense scenes whenever the killers around, especially at night wherein certain scenes had our leads viciously cornered like animals.

The killers themselves were no joke neither. They're dumb-looking, child-like and creates weird "whistle-giggle" noises, but no less fatal. Their origins weren't fully explained but the mountain family living within the woods hinted connection to them, along with the idea of incest and inbreeding in some certain scenes. Nevertheless, they're still basically random boogeymen who just happens to be roaming the woods for some people to cut up just for the heck of it, and in a contextual notion, nothing could be scarier.

It's rare to have a backwoods slashers had been done right, and this film may or may not be an example of one. It's overlooked for many reasons, some sharing mine while others differ, but I can assure you that it's a great film for avid slasher fans to see, even if it they have to wait an hour or so before the action starts.
Bodycount:
1 male had his groin impaled with saw-toothed machete
1 male pushed off a cliff and drowns in river
1 male pinned and impaled on the ground with machete
1 female killed offscreen
1 male repeatedly shot on the back with shotgun
1 male choked on a fist
total: 6
Posted by Kaijinu at 1:08 PM