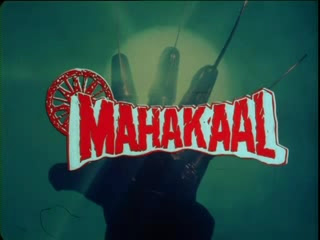 Old school Bollywood films; those pieces of cinema from India well known for their distinctive taste for musical, action and romance thrown in altogether to whatever genre you're watching. If there's another thing I know about Bollywood flicks outside these distinctive traits, it's that they're known to knock off a few Western films. I wouldn't call it plagiarism (or, maybe it is) but due to constraints of rushed production schedules and small budgets, some of directors normally would resort to this. For instance, the slashers Sssshhhh and Kuchh to Hai are two 2003 I Know what you did last Summer rip-offs, but thanks to the secluded nature of the India's cinema as well as most of the public's unawareness to Western media back then, they were easily passed off as their own run.

Well, I'm not here to talk about plagiarism in Bollywood cinemas. That's the lawyers' problem! No. No, I'm here to review the Bollywood Nightmare on Elm Street Rip-off, Mahakaal! (or, Mahakaal: The Monster!) 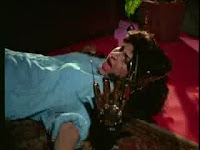 Two girls, Anita and Seema, are haunted by nightmares revolving around a burnt man with razor gloves, finding themselves waking up wounded in the same manner as they did in their dreams. When the nightmares become too unbearable, the girls decide to go on a trip and stop by at a nearby hotel when their car broke down, only for Seema to fall prey to the nightmares again, this time finally killing her when the dream man got his grimy claw(s) all over her. This death gets the attention of Anita's father, the head of a local police force and the one who had taken down a child murdering serial killer known as Shakaal.

As more of Anita's friends start to die off from their own nightmares, it becomes apparent Shakaal is back to exact his vengeance from beyond the grave. Meaner, Angrier and sporting a mullet! 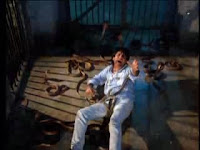 So basically, Mahakaal is a two and a half hour long re-adaptation of the original A Nightmare on Elm Street, sporting a similar plot structure, five measly murders (the first happening around the 45 minute mark!) and gallons of rip-offed elements from nearly all the Nightmare movies such as the theme of killer dreams, a lazy variation to our nightmare man (Think classic Freddy with gold gloves, wearing this trench coat suit in New Nightmare and, again, a mullet), as well as scenes upon scenes of scares and plot development.

And it doesn't just stop there; somewhere in the second half, we get a one-time possession thrown in for no reason (probably a nod to Freddy's Revenge (1985)) and even a water bed kill from A Nightmare on Elm Street 4: Dream Master (1988) just for the sake of tackling it. Frankly, it's an odd experience sitting through this piece since it covers everything from the likes of teen comedy, martial arts, some (failed) rape-revenge angle and the classic bollywood musical dance numbers, finding oneself wondering whether you're watching a horror film in the first place. 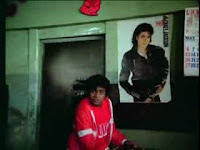 With this, the film is uneven in tone with all that craziness; one second we're watching a girl desperately running away from her fate as a human sushi, next we're watching her and her boyfriend do a five minute dance-a-thon of how much they love each other. If that's not silly enough, we also have a character named "Canteen" who's into Michael Jackson and dressing up as a vigilante superhero (and actually managing to fight off four thugs in process), filling in the comic relief role perfectly with his wide array of antics. 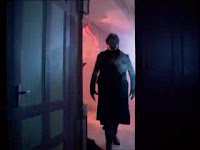 As if pushing the comedy aspects of the Freddy character up an ante, the film's silly nature is almost bad-cheese worthy, like an actual parody of the Nightmare on Elm Street films with the irony that the villain hardly talked. Shakaal never went one-liner happy and simply just laughs whenever he's around, making this villain lacking much onscreen prowess than his American original, though with his clawed glove and burnt face, he does still look menacing if not funny at times, dishing out some original variation of the Elm Street deaths.

Make no doubt about it, Mahakaal is anything but coherent and sane, though beyond the unoriginality is a movie trying hard to be fun and at some level between stupidity and creative mess, it works. It has the feel of a good "bad" grindhouse exploitation movie despite it's 90s release, making it far from a great film but entertaining nonetheless. If you want a bad movie to ruin everything you believed in the Nightmare movies, this is it! (That, or the other Elm Street rip-off Khooni Murdaa (1988)!)