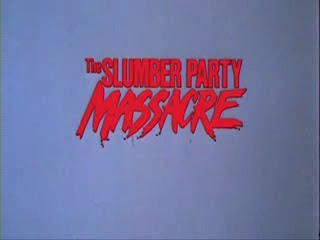 At first, I had very little interest on seeing The Slumber Party Massacre around the time I was re-orienting myself to slasher films a few years back. The title alone felt like a cheap little number with nubile teenage girls yakking their big 80s hair off about boys, being popular and stuff, only to end up in pieces at the hands of a psycho. That was until I've read an article concerning this film being written by a feminist named Rita Mae Brown and directed by Amy Holden Jones as an attempt to parody the supposed female-hating ways of the 80s hack-n-slash.
The result? Far from the point. In fact, the film is sleazier and crazier than any bodycounters done before. Seeing how much trouble this little title alone went through, I gave it a shot and ended up liking it more than I expected!

Opening with your typical early morning around a good little town somewhere in the US of A, we see a paper boy doing his route tossing papers which reads about a mass killer by the name of Russ Thorn breaking out from an institute. On this day, too, Trish Devereaux is bidding her parents goodbye as they go for a vacation, leaving her alone under the watchful eyes of her neighbors. (Much to her dismay)
But thinking she'll do fine on her own, Trish plans a slumber party and invites her friends Diane, Jackie and Kimberly to enjoy an evening of debauchery with pizza, lingerie and various boys gatecrashing, all the while new girl Valerie from across the street looks after her younger sister, Playboy-reading "It crowd"-wannabe Courtney who in turn wants to join Trish's party.

It's all fine and dandy until Trish and the girls found their pizza man with his peepers drilled out. Yes, Russ Thorn is behind this and now he's breaking in to finish off every single peeps in that party, which is terrible news to Courtney when she finally decided to crash the celebration only to get caught in between a psycho and his victims. With her sister in trouble, Valerie has no choice but to get involved and stop the killer herself before he adds Courtney to his drilling list.

While this film do suffer from an uneven scripting and tone, its plot does road itself easily without completely relying on twists or gimmicks, meaning The Slumber Party Massacre pretty much gave it all as a basic slasher narrative, passing off one-liners, morbid humor and some pretty cool kills quite nicely whenever it's not messing around with fair filler moments of false scares and general build-ups that had all the female characters interacting.

With the movie more or less embodying the cheesier side of the slasher build, most of the characterization here do lean slightly on the dim and occasionally sleazy as underwear clad girls just bubble around before the psycho strikes, all the while male characters are depicted as stereotypical sex-hungry jocks and nerds (or somewhere in between) that are equally doomed to get drill. Some of the intended feminist contexts do elevate the Slumber Party Massacre on the side, mainly on how it depicts its killer and his choice of murder weapon as a nod to libido subtext. It's cheekily depicted here via shots including the drillbit dangling between Thorn's legs and, curiously, when he lost his drill to a machete, he goes all ape on his victims as if they get rid of something very dear to him. Symbolically castrated perhaps? Maybe. After all, he is an Average Joe killer and what he lacked in man-of-steel traits of Michael, Jason or, in some incarnation, Leatherface, or in supernatural magick like Freddy, he probably makes it up with his powerdrill.

The kills, while starting off cheap and easy (blood splashes and offscreens), escalates along the tension and gores up a bit better after each slaying. Some are darkly comical especially the one with the eyeless pizza boy, while others are decent like the case of a poor old-timer and the drill bit going through his neck. I can't help but note that the bodycount is far from misogynistic as well since the male and female death ratio are nearly even and the survival count among the gals are higher than usual.

Slumber Party Massacre, whether as a straight slasher or a horror flick for gals, is all in all a recommendable 77 minute of pure and standard slash-o-rama that anyone looking for an easy slice of horror entertainment can surely like. Even with it's uneven scripting, it has more punch and gut compared to some of its kin and sometimes that's all you'll need for a dead teenager flick to be good!