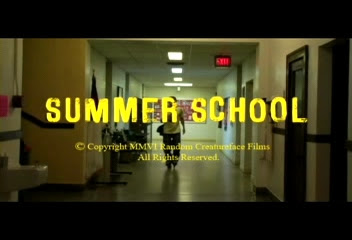 Not to be confused with the 87' comedy classic Summer School, this original and surprisingly entertaining piece of indie-horror is a definite watch for those who shares a love of reviewing horror flicks and exploitation movies from slashers to Nazis, from Redneck horrors to monsters. 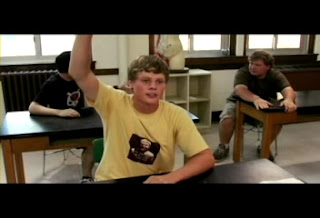 Charles (Simon Wallace) runs a horror review site (just like this, and perhaps a million more out there) and decided to stay up for the last three days to binge on B-flicks in order to keep up with his posts. In doing so, he ends up spending his first day of Summer class asleep but it seems there's more to this than mere insomnia; in what appears to be a mental flux, Charles starts to dream scenarios based on the genres he watched and the more he dwells in each, the more he loses grip of what's real and not. As he experience and live through one horror scenario to the next, how long can his mind take it and, more importantly, will he wake up fine in the end?

Summer School is a segmented horror flick that ventures in and out of different 70s/80s exploitation sub-genres, all under the direction of multiple directors and around a budget of 8,000 dollars. Normally this would come varying in results, as in some segment would likely shine above the other, but while there were weak segments, the entire movie held on pretty good as it is welded in near pitch-perfect flow, resulting to a thought-provoking and wildly intense horror film.

With a unique story, great direction, fair script, decent special effects, beautiful camera work and editing and most of all, talented actors, it has something for everyone to enjoy and experience at the same time. As an anthology, each segment is faithful to the style and takes of the horror sub-genre it tackles, making it quite a treat for those who're into them as well as for those trying out new and wider horror tastes. That being said, it puts our lead student in a bit of a ride as while we know pretty soon that he's dreaming it all, we can't help but feel a tad aghast while we watch him get submitted into these horrors one take at a time. (And devilishly stabbing us at the probability of the "effects" of seeing too much horror films) 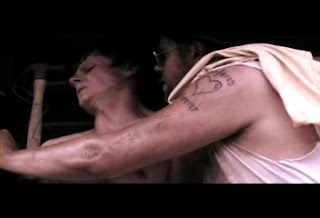 Now, I do have to give a hand for Simon Wallace; as Charles, he maintained his performance as hero, victim and even villain, so much to prove this film's little charm came from a young, inexperienced and little known actor. The rest of the supporting cast are no short of amazing either; whatever role they're are in a segment, just as Charles is to succumb to these nightmares, so do they albeit more through our lead's point of view. Ty Richardson, for one, mostly posed as a security guard in this film and would have been an easy minor character to disregard if it wasn't for his hearty performance as a Nazi captain. (My personal fave segment. Though, it is a bit hard to watch, since it resembles a certain notorious campus massacre) Same goes to Tony Czech and Lance Hendrickson as Charles troublemaking best buds, and Amy Cocchiarella as Lindsey, his little crush.

Adding to the fluid performances of our cast is this film's awesome editing. What it lacked in budget, Summer School pays it up in creativity not only with its scripting and direction but also in giving this film a polished yet gritty look in around a measly thousand dollars. In fact, if it wasn't for the editing, I would clearly see how cheap this film would have looked as while the effects are top-notch, the editing had a chance to ruin the flow of the story if it was mishandled. Thank God for small mercies.

As a indie-film, Summer School's truly exceptional.  Seek if you love segmented horrors, a stroll back to memory lane or a uniquely executed horror film.