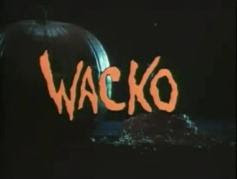 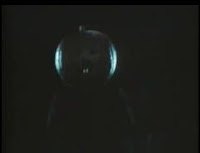 Thirteen years ago at one Halloween night, Mary Graves saw her older sister and her friends got shredded to bits by a lawnmower-riding pumpkin-headed killer, mentally scarring enough to relive that night over and over again. 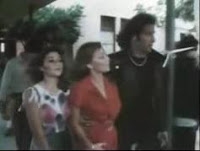 So, her dad's not gonna help her overcome her fear of lawnmowers and sex, her boyfriend makes her uneasy, what else can go wrong?

Well, there's the mutilated body and the escaped loon but not to worry! A washed-up cop (Joe Don Baker) is on the case! Same cop who handled the lawnmower killer back thirteen years prior, an event that have been mentally tormenting him until this very day -oh I see where this is going.

So we have sadistic principals, a teenager who goes "Linda Blair" every time he eats pea soup, and baby lawnmowers killing people, all of this and more at the Prom; Who will live? Who will die? And what's with the lawnmowers?

Wacko! is definitely another slasher parody, one being of the three 80s spoof including the superior Student Bodies and Pandemonium.

Now "overcook's" not the word I'm looking for describing this dreck. If anything else, it'll be uneven: if Student Bodies made its comedy work by providing witty remarks and spoofs at the slasher cliches, and Pandemonium made it work by following the slasher format and just gave the randomness a go that blended quite well, Wacko! lost its head on the comedy a bit too much and loses everything else along the way. Among these three, or any slasher spoof made with a high bodycount, Wacko!'s format is the least slasher-like with the filler moments and the bodycount happening way in the last few minutes so quickly that it felt it lost the slasher taste all through out. Kinda goes against the sole purpose of a slasher spoof and, worse, the jokes aren't even that brilliant. 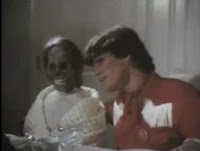 At times, the gags do its work, I smiled at the winks and nods at the genre's two most prolific and influential directors Hitchcock and Palma, and too at scenes like that cheeky nod to the space-age slasher Alien and that one random letter sent by the killer, thrown to the window attached to a lawnmower and read "it’s Halloween, it’s Prom Night, there’s a psycho on the loose so don’t open the door, don’t answer the phone, don’t look in the attic, don’t go to the bathroom, don’t go into the ocean and don’t go into space ‘cos no one can hear you scream!”, but as much as they try, there's a lot of unfunny stretch here that not even their wacky characters and premise can fix. 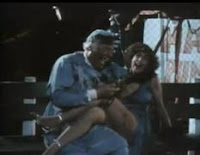 It could be a matter of humor but Wacko! is a far cry from Student Bodies, or even Pandemonium. Heck, it's not even Scary Movie! At least for me, Wacko! says it all in its title: a wacky comedy with wacky wackiness wackier than it should be.

Bodycount:
1 female and 1 male shredded to bits with a lawnmower
1 female found shredded to bits
1 female sawed in half in a magic show...during a science class
1 baby lawnmower shot to death...wait, what?
1 male had his head crushed with vice
1 female decapitated with axe
1 male drowned in sink and got shredded on garbage disposal
1 female killed in dishwasher
1 impaled with flagpole, shot with shotgun, ranover with lawnmower...and I guess he also crashed through the wall...
1 male baby lawnmower broke out of his chest (dream)
Total: 11
Posted by Kaijinu at 10:51 PM