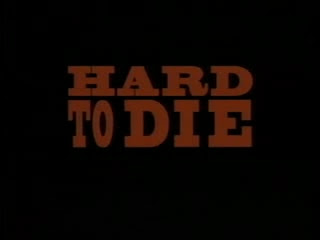 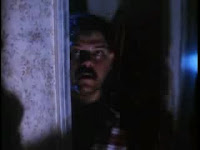 A near-parody of Die Hard (1988), Hard to Kill (1990) and late 80s slashers, Hard to Die tells the story of five voluptuous employees working overtime at the Acme Lingerie office tower to sort out its stock inventory. With them is the uber creepy and obese janitor Orville Ketchum, who was present during the Hockstatter House massacre, wherein a deranged madman killed multiple girls inside his own home.

As they try to avoid this creepy mustachioed fatso, the girls later receive a package containing the boxed evil spirit of Hockstatter. (it could happen, people!) They inevitably set it free by accident, giving the spirit the chance to now possess one of them and continue murdering anyone they can get their crummy hands at.

Now seeing this is a film about five women trapped in a building with a loose psycho with only a barrage of guns to defend themselves, I said to myself  "Why on Earth not?" as I giddily tracked this down. I then see my mistakes once I notice how bad the acting is and how this movie shamelessly spliced in scenes from The Slumber Party Massacre (1982). Right there, I lost it. 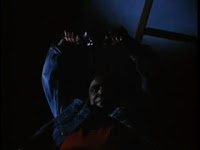 Okay, lemme get this out of my system first: Hard To Die has nothing to do with Slumber Party Massacre. What really grinds my gears here was that this film half-ass attempt to pass it off as the so-called "Hockstatter House Massacre" by changing the name of the killer from Russ Thorn to Hockstatter and make up an entirely different story to coincide with the clips. Um, not the wisest shit to do unless you want to expose how cheap your movie is. Or confuse anyone! Anywho, that's one point off for ripping my fave slumber party slasher, now let see the other casualties. 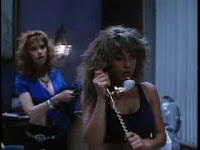 Hard to Die is a perfect example of a bad movie made worse; the parodies on slasher flicks from nubile female victims to indestructible killers are present here, pushed to heights so high that it ended up so stale. It overdid the sleaze by having the female casts dress up in skimpy lingerie, put into situations where they get wet and showers, which would have been fine for me if it wasn't for the bad cheese. It may be not a big deal for some seeing this is a horror-comedy but, why do wet skin sound like two balloons being rubbed together? Was it the silicone? I think someone's idea of a dumb blonde was up there too, as these gals utter the lamest one-liners and, too, wasted so many time trying to kill off the wrong guy. Okay, "kill" is an understatement; it's no spoiler (if it is, then to hell with it) but they thought the killer was Orville. What's so shocking here was that this tub of lard took on hails of bullets, garroted with telephone chords, knifed, pushed off a building, and yet he lived! Right until the fucking ending, this bastard lived! Again, it should have been funny but I just find this frustrating in this film, so much so I remember having a headache in the midst of this madness. 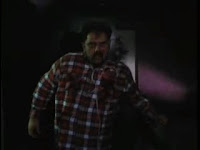 Acting and continuity were never the strong points for films of this kind, so I'm leaving those alone. I think the most valid reason for my rating is that it's plain boring. An hour and 17 minutes is not worth wasting in a flick where we watch a fat guy and a possessed lady in lingerie shoot each other to death over and over again, just to live up to the movie's promise of an action-oriented horror flick. Puh-leeze, just because we have folks shot each other with guns doesn't make it all action-y!

I'm up for mindless fun, but this is too ridiculous for my liking! Real travesty, right here. Don't waste your breath on its false promises, you're better off watching the REAL Slumber Party Massacre (1982) instead!