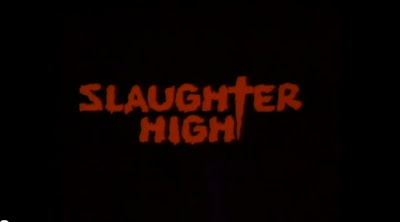 There's no denying my love for this bad cheese. The moment I watched it from beginning to end, the moment I saw the kills and the deserving shmuckos in this avenging tale of a wronged nerd, I knew this movie's definitely my kind of prime cut. Bad in everyway, but deliciously guilty of pleasure, Slaughter High (1986) gets an A for Absurdity and Feisty Gouda!

Marty Rantzen (Simon Scuddamore in his last and only acting role before his death by drug overdose. God rest him.) is the king of nerds at Doddsville High, everything from straight As, thick glasses, bad hair, and zero sense of style. Worse? His birthday falls on April 1. So when he thinks he finally struck luck and is getting a piece of his sexy classmate, Carol Manning (Caroline Munro, in her 30s and playing a teenager... ), it all goes shamefully back at him when, whilst butt-naked, he finds himself pranked by his class as they yell ‘Where’s the beef?’, electrocute him and dunk his head into the toilet bowl.

The caper isn't unnoticed, however, as the school coach catches them and punishes all who are responsible for the prank an extra gym class, giving the grateful nerd his one shred of decency some time with himself and his experiments. However, two degenerates decided to pull one last joke on him as payback: after giving Marty a fake roll of weed that had him running to the toilet to throw up, one of the pranksters sneaks into the lab and messes with Marty's experiments, causing a beaker to explode upon Marty's return, catching the room on fire and spilling nitric acid over his face. The rest of the class arrive in time to see him surrounded by flames and screaming in pain. After being taken to a stretcher, with his burnt face covered in bandages, Marty was never seen or heard of again...

Ten years later, a high school reunion gets held at the now abandoned campus, suspiciously only inviting those who were responsible for the prank. Finding a single room lit, with streamers and beer in all the dust and cobwebs and their old lockers stuffed with high school memorabilia, the gang makes the most out of the strange set, but when guts explode open and a psycho in a jester mask (the same one the bullies wore on that fateful day) begins to crucify mysteriously present janitors, it could only mean one thing: Marty has come back for revenge!

Slaughter High (1986) is probably the most basic example of what a slasher film is, only pushed to the max with over-the-top gore, crazy nudity and the dumbest victims to ever picked off one-by-one. In fact, its already bad enough that our victims were bullies with no shred of sympathy to begin with (save, I guess, Munro's character?), but their ho-hum attitude regarding their responsibilities to the accident after all of these years and their curiously unfazed reaction from their friends dying one by one is just mind-boggling! Like, just because you got dirty from all the splattered blood from your friend's exploding gut, or that the killer's not seen for a while, that doesn't mean you have to take a shower soon after, or have sex! Why would you even have sex when you're trapped in a dusty abandoned campus with a killer on the loose? How will any of these help the situation?

This could be the very reason why this film is divided between being loved and hated; depending on how seriously you could take your slashers, Slaughter High falls between straight bodycounting to poking fun at the cliches of the sub-genre itself. The acting is atrocious beyond sympathy, plot resembles the creative writing of a five year old and the production looks cheap and amateruish, with Harry Manfredini, who worked on scoring Friday the 13th movies, providing familiar sounding tunes that winks at us Jason fans.

Nevertheless, if one is looking for a decent junkfood horror, Slaughter High proves to be enjoyable enough that it can be forgiven for its shortcomings. It has one of the better villains to come out of the sub-genre, wearing a creepy old man's face with a jester hat on top with his bells jingling in each step. Killer nerd Marty more or less represents a troubled youth and a powerful monster that warns bullies not to dish it to the little, though his only flaw is that he's guilty enough to suffer some serious brain damage, making him a rather sad to look at during scenes. The remaining half of the film gives a good run at everything to keep an open-minded, or to least, an easily satisfied, fan to enjoy; if the messy kills aren't enough to bring you delight, then the workable cat-and-mouse chases at the near end may be your cup of tea.

It also features one of the most confusing endings; it's open to interpretations, though not as bad as one might take it if they're willing to flex some brain power.

Slaughter High (1986), all in all, is all about taste: for some, it's that little stain you wish is gone from the world, while for some, it's the very slasher film itself. Love or hate it, a horror film with that much cheese can't be all that bad so let lose and go crazy!